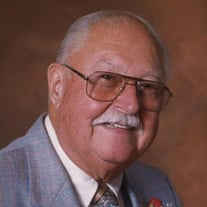 The Mississippi River flowed right by his home. Frederick “Fred” Bresette, age 91, of Sabula, passed away Monday, September 27, 2021 at his daughter’s home in Loves Park, Illinois. Fred cared about the communities where he lived. He served in the US Navy and contributed to each community in his own way. While at Sabula, he operated a ferry for folks whenever the bridge was closed (or until the government took over.) He also operated a small machine shop in Sabula named B&C Industries. When Fred lived in Rockford and Rochelle, he was an inventor and business owner, working with WF & John Barnes Co., AW Anderson Mfg, Panelectric Mfg, Arbor Industries Sheet Metal and Somaca Mfg. “He could sell any idea and was a Jack-of-all-trades, master of most!” Fred was born August 16, 1930 near Providence, Rhode Island, the son of Frederick Sr. and Joan (Provencal) Bresette. When he was nine, the family moved to Rockford where Fred attended school and then served in the Navy from 1948 - 1951, aboard the USS Coral Sea Aircraft Carrier in the Mediterranean. Fred married Olive Kirchner in 1948 and they raised two daughters, Linda and Susan. He later married Shirley (Myers) Conner June 30, 1990. Throughout their life together, they enjoyed their home along the Mississippi River, where Fred rented-out docks. They would often take week-long boat excursions and travel with friends up and down the Mississippi. In their motorhome they also ventured across country to visit with family and friends. Shirley passed away September 12, 2020. Fred was a member of the American Legion in Sabula and the US Power Squadron Boating Club where he served as a past Commodore. He also served as a volunteer fireman while living in Rochelle. He loved visiting lighthouses, especially near Norfolk, Virginia and Rhode Island where he was stationed while in the Navy. Fred believed, where there was a will, there was a way. “If someone said you can’t do it, he was going to make damn sure he could do it! He was both intelligent, and complicated.” Fred is survived by two daughters, Linda Ware of Freeport and Susan Gillespie of Loves Park; step-daughter, Kathy (Steve) Austin; daughter-in-law, Sheila Conner; Grandchildren: Monica (Richard) Johnson, Michael (Jillian) Austin, Mark (Katy) Austin, Jennifer (Brett) Miller, Caitlyn Conner, Brock (Mandi) Conner; and Great Grandchildren: Jonathan, Lauren, William, Annabelle, Grant, Ellen Marie, Margaret, Levi, Amelia, Ruby, Violet, Payton, Paige, Arianna, Alanna, Kaleb, Konner, Kole, George, Penelope and Monica. Fred was preceded in death by both parents; a sister, Trudy Stroup; brothers-in-law, William, Paul and Artie; a step-son Kevin; and his first wife, Olive, and his wife, Shirley. A Celebration of Life service will be held 12:00 noon Friday, October 1, 2021 at Law-Jones Funeral Home, Savanna, Illinois with a visitation one hour prior to the service. Burial will be in Evergreen Cemetery, Sabula with Military honors. Friends are invited to share in Fred’s life at lawjonesfuneralhome.com.

The Mississippi River flowed right by his home. Frederick &#8220;Fred&#8221; Bresette, age 91, of Sabula, passed away Monday, September 27, 2021 at his daughter&#8217;s home in Loves Park, Illinois. Fred cared about the communities where... View Obituary & Service Information

The family of Frederick "Fred" Bresette created this Life Tributes page to make it easy to share your memories.

The Mississippi River flowed right by his home. Frederick “Fred”...

Send flowers to the Bresette family.