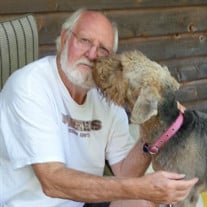 Freddie Carroll Mayhall, age 83, of Thomson, IL, passed away in his home in the early morning hours of Thursday, June 11, 2020. A private family celebration of Fred’s life will be held. A memorial fund has been established in Fred’s name. Fred was born April 10, 1937, in Quitaque, TX, the son of Bert and Thelma (Havenhill) Mayhall. He spent his childhood in Texas, graduating from Amarillo High School. He then joined the United States Marines, rising to the rank of Captain. Fred faithfully served his country for eight years, before his honorable discharge. Fred then joined the Iron Worker’s Local Union 111, and was a proud member for 51 years. He dedicated 33 years of hard work to his trade, working with several local contractors, and travelling for out of state contracts. On September 7, 1985, Fred married Diane Zubaty, in Davenport, IA, and spent the rest of his days with his loving wife. In his free time, Fred enjoyed being outdoors. He loved boating and fishing, and spending time in his yard. Fred was the type to always keep busy. He could regularly be found tinkering in his garage and working on his 1940 Chevy. He had a soft spot for animals, with great love for his Airedale puppies, throughout the years. Above all else, Fred loved his family. Fred will be dearly missed by his wife Diane; six children, Steven Rumley, of Amarillo, TX, Tiffany (Thomas) Merfert, of Harrison, TN, Stacey Hickey, of Frederick, MD, Jennifer (Keith) Boysen, of Clinton, IA, Monica (Christopher) Laufenberg, of Clinton, IA, and Ryan (Kristin) Maus, of Middletown, DE; 14 grandchildren, one brother, Monte (Era Faye) Mayhall, of Monahan, TX, as well as many dear friends. Fred is preceded in death by his parents, Bert and Thelma, and four sisters Juanita Noah, Wanda Mayhall, Lucille Mayhall, and Billy June Freeman.

Freddie Carroll Mayhall, age 83, of Thomson, IL, passed away in his home in the early morning hours of Thursday, June 11, 2020. A private family celebration of Fred&#8217;s life will be held. A memorial fund has been established in Fred&#8217;s... View Obituary & Service Information

The family of Fred C. Mayhall created this Life Tributes page to make it easy to share your memories.

Send flowers to the Mayhall family.