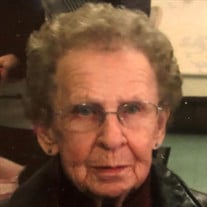 Evelyn Tipton, age 93, of Forreston, Illinois, passed away Friday, November 13, 2020 at home in the care of her loving family and Serenity Hospice. A Celebration of Life service will be held 2:00 p.m. Tuesday, November 17, 2020 at Law-Jones Mt. Carroll. Visitation will be held from 1:00 – 2:00 p.m., one hour prior to the service. Burial will be in Oak Hill Cemetery, Mt. Carroll. Memorials may be made to Walnut Acres Nursing Center, Freeport, where Evelyn had worked for many years. Evelyn was born December 2, 1926, in rural Lanark, Illinois, the daughter of Lawrence and Hazel (Schmidekamp) Nowak. After eighth grade, Evelyn graduated into the working world. When Evelyn was fifteen, she married Earl Thompson, in a relatively short amount of time, young Evelyn was left a single mother of two sons. The world changed for her in 1947, when Evelyn met the love of her life, Sherman Tipton. Sherman had three daughters about the same age as Evelyn’s two sons. Their first date was sitting in the front-seat as five children peered from the back-seat in Sherman’s car. It was evident that God was working in their relationship, and on March 10, 1948, Evelyn and Sherman were married in Mt. Carroll. They soon had their sixth child as they looked toward their future. Evelyn became a Nurse and worked twenty-five years at the Stephenson County Nursing Home, later named Walnut Acres. They moved to Freeport in 1960 after Sherman began working for Civil Constructors. In 1994, after retirement, they moved to Monticello, Kentucky near Cumberland Lake to be near their son, Glen, and of course, fish. They returned to Illinois in 1999 and bought a home in Forreston. Sherman passed away August 31, 2003. They were members of the Forreston United Methodist Church. Everyone knew that Mom and Dad liked to fish and camp, often going just as far as the Mississippi, at Spring Lake. Once, in Manitoba, Canada, Evelyn was honored with the Big Fish Of The Year Award, for catching a twelve inch plus Crappie. She also liked sewing, cooking and spending time with her dog, Sadie. Her secret to making the best cheesecakes, “just add a little pineapple.” Family gatherings were the most important thing. In 2008, she took a 14-day trip to Alaska with family, one of her favorite trips. Evelyn will be dearly missed by her five children, Patricia Tipton of Chadwick, Glen (Patricia) Thompson of Monticello, Kentucky, Ginger (Robert) Law of Mt. Carroll, Shirley (David) Senn, of Mt. Carroll, and Steve (Jacquelyn) Tipton of Shannon; 21 grandchildren, 34 great-grandchildren and 51 great-great-grandchildren; her brother, Robert (Shirley) Nowak of Fulton; two sisters, Ruth Rekenthaler of Lanark and Donna (Fred) Domberger of Kent; two special friends, Betty Hake and Valerie Woods. Evelyn is preceded in death by her parents; a son Richard at the age of 24; two grandchildren, Michael Grimm and Jerry Thompson, five brothers and a sister.

Evelyn Tipton, age 93, of Forreston, Illinois, passed away Friday, November 13, 2020 at home in the care of her loving family and Serenity Hospice. A Celebration of Life service will be held 2:00 p.m. Tuesday, November 17, 2020 at Law-Jones... View Obituary & Service Information

The family of Evelyn Tipton created this Life Tributes page to make it easy to share your memories.

Send flowers to the Tipton family.