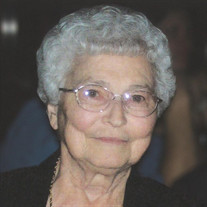 Esther M. Martin, age 85, of Tipton, Iowa, previously of Lanark, Illinois, passed Saturday, August 15, 2020 at the Cedar Manor Nursing Center, Tipton, Iowa. A funeral service will be held 10:30 a.m. Saturday, August 22, 2020 at the Mt. Carroll Church of God, Mt. Carroll, Illinois. Visitation will be held one hour prior to the service from 9:30 – 10:30 a.m. A memorial fund has been established. Esther was born October 20, 1934, in Neshola County, Mississippi, the daughter of Covert and Esther Pauline (Talbert) Lundy. On July 2, 1960 Esther married Glenn Martin in Douglas, Georgia. They celebrated 51 years of marriage until Glenn’s passing. She was a member of the Church of God in Mt. Carroll. Esther was a homemaker for many years. To keep busy, she opened her own beauty shop in 1976, and worked there until she retired. She enjoyed traveling and cooking. She liked to sew and knit. Esther will be dearly missed by her son Timothy Martin of Davenport, Iowa; her daughter Karen (Greg) Bondele of Monroe, Wisconsin; 4 grandchildren; 10 great-grandchildren; two brothers, C. A. Lundy of Rockford, Illinois and Reverend Jerry Lundy of Louisville, Mississippi; and a sister Helen Barber of Madison, Mississippi. Esther is preceded in death by her husband, parents, daughter Glenda, and two sisters, Thelma and Bernice.

The family of Esther M. Martin created this Life Tributes page to make it easy to share your memories.

Send flowers to the Martin family.