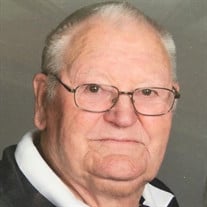 Elmer Yaddof Jr, born at home in 1931 in Preston IA, passed away November 30th, 2020, in his home at the age of 89. Elmer’s parents were Elmer Yaddof Sr. and Norma (Ruchotzke) Yaddof. He was baptized as a member of St. John’s Evangelical Lutheran Church in Preston, IA, a graduate of Preston High School, and married Carol Meyer on February 21st, 1953, in Green Island, IA. A private grave side service will be held at the Preston Cemetery. Elmer was fascinated with honeybees since childhood and decided to start a beekeeping business which— with the help of his sons Tom and Bill and son-in-law Ray Johnson —became the largest honey producer in Iowa. In 1987 and 88, the business produced a million pounds of honey, had 8,000 hives and covered a 150-mile radius around Preston, IA. Ray and his sons continue the operation today. In 1975 and 76 Elmer was recognized in the “Who’s Who In Finance and Industry”. In later years Elmer served as a beekeeping expert during official U.S. Government events in China and South America. In 2007, the American Honey Producers Association named Elmer Beekeeper of the Year. Elmer was the oldest active beekeeper in the state of Iowa. Elmer loved checking on beehives every day and meticulously recorded weather patterns and changes to the environment over the years. His records were critical to planning his operations and continue to guide three generations of beekeepers today. Later in his career, he focused on working with the landowners who hosted the business’ beehives. Elmer was a member of the Preston Fire Department, Iowa Honey Producers, American Honey Producers, and several St John’s Lutheran Church committees. He held leadership positions in many of these organizations. While starting his beekeeping business, Elmer had a variety of additional jobs (rural mail carrier, delivery milkman, assembly line worker at Clinton Engines and Savanna Army Depot), From 1952 to 1956, he served in the U.S Army Reserve and Iowa National Guard as a Sergeant with Battery A 556th Field Artillery Battalion, in Clinton, IA. Elmer was a lifelong trapper and hunter. In 1952, he was proud to be among the first hunters to receive an Iowa deer hunting license and obtained one every year thereafter. He was active in high school sports as a player in his youth and later on as an official baseball umpire. Elmer had a fun loving and curious personality. He loved kidding around with family and friends. He was passionate about beekeeping and proud of his profession. Elmer loved to see the smile on people’s faces when he delivered or gave them honey. Elmer is survived by his wife, Carol, and their four children: Steven (Linda) of Platteville, WI, Christina (Ray) Johnson, Thomas (Rose), and William (Janet), all of Preston, IA. Also by his sister, Lois (Larry) Hoffman, his 10 grandchildren and 19 great-grandchildren. Elmer was preceded in death by his parents and five siblings: Melvin, Alvin, Everett, Norman, Robert, and Florence. Also, one grandson, Devon Yaddof, and two great granddaughters, Paisley Bennett and Grace Yaddof. A memorial fund for Elmer Yaddof has been established.

The family of Elmer Yaddof Jr created this Life Tributes page to make it easy to share your memories.

Send flowers to the Yaddof family.