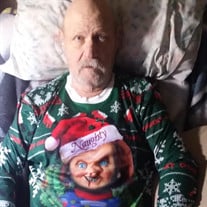 Elmer Paul Monshower, of Thomson, who served in the Navy and retired after a long career at Northwest Steel and Wire, includes being a Grandpa and Friend as his biggest accomplishments. At the age of 72, Elmer passed away Saturday, February 22, 2020 at home after an extended illness. A Celebration of Life Gathering will be held at a later date. Elmer was born December 10, 1947 in Kansas City, Missouri, the son of Alvah and Natalie (Elbe) Monshower. He attended schools in Sterling, Illinois, and recalled often skipping school to hang out at the pool hall where he could earn a quarter for every rack of balls. In 1965, Elmer volunteered for the Navy, signing-up to serve as a chef on the USS Sandoval PA-194. His homeport was Norfolk, Virginia, and Elmer was regarded as one of the best chefs. The USS Sandoval was on alert with the 6th Fleet in the 1967 Arab-Israeli War, and in 1968 operated some 600 miles west of the Canary Islands as a unit of the Manned Spacecraft Recovery Force for Apollo 8. It was aboard the USS Sandoval that Elmer had a brush with fame as he served breakfast to Robert Mitchum and his filming crew, as they were making the 1968 film, “Anzio.” Elmer returned to Sterling to begin a 30-year career at Northwest Steel & Wire. He married Pat in 1987. Pat passed away February 20, 1996. On August 30, 1996, Elmer married Kathy Whiting. They have celebrated 23 years together and shared six children. With all the family, Elmer was able to do his favorite thing, “Be a Grandpa.” He took time to teach his grandchildren to save money and work. If you spent much time with Elmer, you soon ended-up arguing about details, as he enjoyed a good debate. He was always in control and looked after everyone in the family. He enjoyed using sarcasm as he lightened-up life as the family “wise guy.” During the last part of Elmer’s life, his family could be heard whispering to Elmer, “Please behave,” as they brought him to his daily routine with his favorite “dialysis girls.” One of the highlights of Elmer’s life was spending time with friends, especially on the golf course. Elmer savored the day he made a hole-in-one, golfing with his buddies. He was using his three-wood at the Cross-Creek Golf Course in Morrison, on the 138-yard hole #2. Elmer and his family also appreciated friends, Jean Wainright, always taking him to dialysis; Crystal Cook, his special daughter-in-law, and Ruth Ann and Peggy McGinnis, who grew up with him and were always like family. Elmer will be dearly missed by his wife, Kathy Monshower of Thomson; seven children, Travis Monshower of Oklahoma, Zachary Monshower of Thomson, Lance Monshower of Savanna, Jesse Smith of Clinton, James Smith of Clinton, Matthew (Amanda) Smith of Thomson, and Annie (Cody) Dyson of Mt. Carroll, Illinois; 21 grandchildren; and 4 great-grandchildren (with one on-the-way.) He is preceded in death by a brother, a sister, and both parents.

Elmer Paul Monshower, of Thomson, who served in the Navy and retired after a long career at Northwest Steel and Wire, includes being a Grandpa and Friend as his biggest accomplishments. At the age of 72, Elmer passed away Saturday, February... View Obituary & Service Information

The family of Elmer Paul Monshower created this Life Tributes page to make it easy to share your memories.

Elmer Paul Monshower, of Thomson, who served in the Navy and...

Send flowers to the Monshower family.