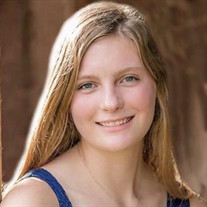 Elizabeth Marie Rath believed there is hope in our world. With a positive attitude, strong work ethic, the ability to persevere through tough circumstances, and caring for others, Elizabeth has left her mark! She has been a role-model for the rest of us to follow. At the age of 21, on Friday, March 13, 2020, Elizabeth joined her Lord. She won a courageous three-year battle with Leukemia which was in remission, but she succumbed to Bronchiolitis Obliterans Syndrome and other challenges with infections. Elizabeth would say, “Leukemia has not brought me down, but it has inspired me.” Elizabeth was born September 6, 1998, the daughter of Keith and Dawn (Behrens) Rath. She grew up in the midst of the northwest Illinois farmland and countryside, learning the value of faith, honesty and hard-work, with her family as a guide. She enjoyed being a guide for her younger brother Adam. Elizabeth was pursuing a medical career path at Augustana College, which would allow her to “give back” to the world through her many gifts and talents. She wanted to go into nursing so that she could care for others and make a difference. Elizabeth was a 2017 graduate of West Carroll High School, where she participated in Cheerleading, Softball, Spanish Club, FFA and several other activities. In FFA she received her State Degree, following in her fathers footsteps and leading her brother into the same accomplishment. In high school she was known as a great role-model and always found herself in a leadership position. Elizabeth received an achievement scholarship to attend Augustana College, where she excelled at her studies, took leadership roles, and participated in two sororities that formed friendships and helped the local community. Elizabeth was majoring in Biology with a minor in Psychology. As a young girl, Elizabeth participated in T-ball, softball and soccer. As she grew she became involved in 4-H and received State recognition in several projects, including child development, woodworking and clothing design. At the age of 14, Elizabeth became interested in hunting, spending quality time with her father and even earning bragging rights by shooting a bigger deer. Later, between treatments while in remission, she was able to take an 8-point buck. Elizabeth found strength from family and her faith. She counted on her parents when life got tough, and stuck by the lesson, “God will never give you more than you can handle.” As she grew older, Elizabeth realized that her mom was her best friend. She will be dearly missed by her parents, Keith and Dawn Rath of rural Savanna; her younger brother Adam; her grandmother, Sharon Behrens of rural Savanna; several aunts, uncles and cousins; and many close friends. She is preceded in death by her paternal grandparents, Fred and Joyce Rath; her maternal grandfather, Donald Behrens; and her uncle, Randy Behrens. A visitation and celebration of life will be held 4:00 – 9:00 p.m. Thursday, March 19, 2020 at the Law-Jones Funeral Home, Mt. Carroll. If you wish not to attend due to health concerns, the family understands and you may leave a condolence online at lawjonesfuneralhome.com. A private (family and close friends) funeral service will be held at Trinity Lutheran Church with burial in the Zion Cemetery, rural Savanna. Elizabeth’s wish is that memorials may be given for the Nikolas Ritschel Foundation and the Anna Miller Foundation to assist with fulfilling wishes for young adults with cancer. You can view a recording of Elizabeth's service at: https://youtu.be/WuLocgDdZqE

Elizabeth Marie Rath believed there is hope in our world. With a positive attitude, strong work ethic, the ability to persevere through tough circumstances, and caring for others, Elizabeth has left her mark! She has been a role-model for... View Obituary & Service Information

The family of Elizabeth Marie Rath created this Life Tributes page to make it easy to share your memories.

Elizabeth Marie Rath believed there is hope in our world. With...

Send flowers to the Rath family.