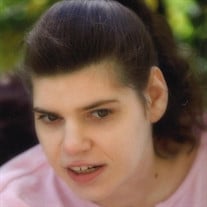 Elizabeth “Liz” Houzenga, age 42, of Sterling, IL, passed away Sunday, March 28th, after a brief illness. A memorial service will be held at 10:00 a.m. Friday, April 2nd at the Upper York Cemetery in Argo Fay, IL. Pastor Ken Zuithoff will officiate. Memorials may be made out to Exceptional Care and Training Center, in Liz’s memory. Liz was born July 31st, 1978, daughter of Van and Leigh Ann (Stocks) Houzenga. She spent time at Walter Lawson’s Children's home from 1985 until 2003, when she moved to Exceptional Care in Sterling, IL. From a young age Liz had a love for music. She found great enjoyment playing tambourine, either by herself, or along to some of her favorite music. She enjoyed all types of music, but especially enjoyed music by the Beach Boys in her adult years. Liz spent most of her life with her sister Susan by her side. They roomed together and shared a lot of common activities. She will be sorely missed by the residents and staff at Exceptional Care. Liz will be dearly missed by her parents, Van and Leigh Ann Houzenga; three siblings, Olivia (Michael) Pelham of Clinton, Nicholas Houzenga of Clinton, IA, Susan Houzenga of Sterling, IL and; four nieces and nephews, Jack and Charlie Pelham, Lucas and Jill Houzenga; and her grandmother, Lorraine Houzenga of Fulton, IL. Elizabeth is preceded in death by her grandmother, Mary Stocks; her grandfathers, James Houzenga, and Frederick Stocks; and her niece, Lauren Elizabeth Pelham.

The family of Elizabeth Ann Houzenga created this Life Tributes page to make it easy to share your memories.

Send flowers to the Houzenga family.