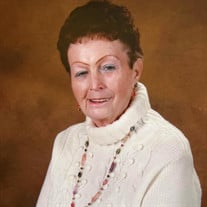 Eleanor Torke was like a live wire, she always kept life fun and was a great friend to many. At the age of 87, Eleanor passed away peacefully at home Friday, February 4, 2022. A Celebration of Life will be held 2:00 p.m. Saturday, February 12, 2022 at the Law-Jones Funeral Home in Savanna. Burial will be in Lower York Cemetery, Thomson.. Visitation will be held from 4:00 p.m- 7:00 p.m. Friday, February 11, 2022 at the funeral home. Friends are invited to share in Eleanor’s life at https://www.facebook.com/groups/481764806862071 Eleanor Mae (Dyson) Torke was born November 20, 1934 to Loretta (Hastings) and Wilber “Web” Dyson. She grew up in the Savanna, Hanover, and Thomson area. After graduating from high school, she married Jim Moore. They had four children. They remained good friends after divorcing until Jim’s passing in 2000. Eleanor married John Torke in 1977 and had many years of happiness until his passing in 2003. Eleanor and John would hold Fish Frys and Wild Game Feeds. They loved to socialize. Her more than him. He was the quiet bear who everyone loved. Eleanor worked at the Savanna Army Depot for many years. Eleanor was also one of the first ambulance drivers in Savanna. This was long before EMTs and ambulances were available. They used an old hearse that was bought by Larry Bearsley from the funeral home. Eleanor also used to drive the local cab in Savanna. In Eleanor’s later years she became very active in the Savanna Moose Lodge. She just received her Lifetime Award last fall. She loved being involved in the Moose. She was put in charge of arranging funeral dinners and did this for many years. By doing this, she became very close with Matt Jones, who she would introduce to everyone as her “other son.” Eleanor knew a lot of people and had made many friends throughout her life. She was a kind and caring person who was all about family and friends. She was known for going the extra mile for everyone. After Eleanor was retired, Eleanor would still stay busy giving rides to her friends who could no longer drive themselves. Eleanor stayed very active in the Moose and her church until Dementia started to take over. Eleanor’s older sister, Crystal Ehredt, was very protective of Eleanor and after the dementia began, Crystal was right there to make sure her baby sister was being taken care of. Although Eleanor overcame a lot of obstacles in her life, dementia was one thing she could not overcome. Eleanor is survived by her four children, Cathy Corey (Duce Dyson), Colleen Terry, Jimmy (Glenda) Moore, and Patty Jo Derrickson; her sister, Crystal Ehredt; her brother and sister in-law, Terry and Linda Christianson of Janesville, WI.; 8 grandchildren; 24 great grandchildren; 4 great-great grandchildren; her special grandson, Josh; and several nieces and nephews. At the end, Eleanor cherished her two very special caregivers, Betty Bailey and Wanda Robinson (Bebe). Eleanor was preceded in death by her parents; husband, John Torke; and two brothers, Benny Dyson and Alfred Dyson.

Eleanor Torke was like a live wire, she always kept life fun and was a great friend to many. At the age of 87, Eleanor passed away peacefully at home Friday, February 4, 2022. A Celebration of Life will be held 2:00 p.m. Saturday, February 12,... View Obituary & Service Information

The family of Eleanor Mae (Dyson) Torke created this Life Tributes page to make it easy to share your memories.

Eleanor Torke was like a live wire, she always kept life fun...