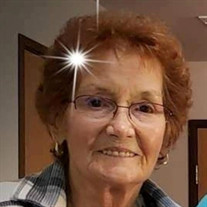 Elaine May Zemke, age 82, of Savanna, previously of Hanover and Lanark, Illinois passed away Friday August 21, 2020 at Allure Nursing Center, Mt. Carroll, Illinois. A private funeral service will be held. You may view it from home at 11:00 a.m. Friday, August 28, 2020, or thereafter on the Elaine Zemke Law-Jones Facebook Group. Burial will take place in Savanna Township Cemetery. A public visitation will be held from 6:00 to 8:00 p.m. at Law-Jones Funeral Home, Savanna, Thursday, August 27, 2020. Face masks and social distancing practices will be required. Elaine was born October 24, 1937 in Alma Center, Wisconsin, the daughter of Earl and Hazel (Tounsand) Dunn. She graduated from Hixton High School in 1955. On November 12, 1955, Elaine married Carrol Lien in Hixton, Wisconsin. They moved to Hanover, Illinois where Carrol took a job on the Hanover Ranch, and they raised four children. Her daughters always remember Elaine and Carrol riding side-by-side in their pick-up truck. Life for Elaine had ups and downs and after several years she remarried. On December 6, 1985 she married Wayne Zemke. She and Wayne lived in Lanark, Illinois and were a good team, spending many years happily married. They loved dancing at Mooney Hollow near Sabula with family. Elaine and Wayne remain good friends today. Elaine life was always complete when she was with family. She always greeted you with a hug and a kiss. The kids and grandkids counted on it! One of her favorites to do was bowling with family and friends. They always had a team and often competed in the Illinois State Bowling Tournament, placing 6th one year. She also liked to golf with family at Lynwood and the Palisades. Family get-togethers were always happening and Elaine liked to follow her grandchildren’s sports. Elaine was a hard worker who held many factory jobs throughout her life. She worked for Eaton Corp. in Hanover and then transferred to Savanna. She also worked for United Beverage and Alco in Savanna. She later worked for H&R Block in Freeport as a Tax Specialist until her retirement in 2014. Elaine will be dearly missed by two daughters, Deborah (David) Leitzen and Rebecca Nave, both of Savanna; eight grandchildren, Justin (Kim) Lien, Michael (Angie) Leitzen, Derik (Melissa) Leitzen, Brandon (Annie) Leitzen, Samantha (Richard Rose) Leitzen, Jason (Jennifer) Nave, Brett (Cheryl) Lawson, Brandi (Matthew) Kerkove; 20 great-grandchildren; one great-great-grandson; a stepdaughter, Suzanne Zemke of Nashville, Tennessee; a stepson, Arthur Zemke of Savanna; two daughters-in-law, Stacy Lien of Columbia, California and Chris Lien in Freeport, Illinois; and two sisters, Lorraine Kilburg and Audrey Scallon, both of Black River Falls, Wisconsin. Elaine is preceded in death by two sons, Gregory Lien in 2009 and Randy Lien in 1985; a son-in-law, Robert Nave in 1977; a great-grandson, Shawn Miller in 2013; three brothers, Kenneth, Donald and Floyd Dunn; two sisters, Devon Maurer and Sherry Sloan; and her parents, Earl and Hazel.

Elaine May Zemke, age 82, of Savanna, previously of Hanover and Lanark, Illinois passed away Friday August 21, 2020 at Allure Nursing Center, Mt. Carroll, Illinois. A private funeral service will be held. You may view it from home at 11:00... View Obituary & Service Information

The family of Elaine May Zemke created this Life Tributes page to make it easy to share your memories.

Elaine May Zemke, age 82, of Savanna, previously of Hanover and...

Send flowers to the Zemke family.