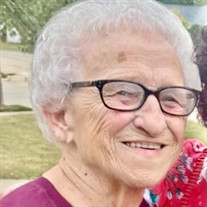 At her home, surrounded by her loved ones, Mrs. Elaine P. Funk, 87, of Sabula, died peacefully on Wednesday, February 2, 2022. Elaine Patricia (Blenner) Funk, mostly known as “Pat”, Mom, and Grandma Funk, was born May 5th, 1934, to Virtus and Alma (Reteslef) Blenner. She attended Sabula Schools and was a 1953 graduate. She was always proud to be one of the oldest classmates at the Sabula School’s alumni banquet. On May 27th, 1961, she was united in marriage to George Funk in Hannibal, Missouri. The couple resided in Sabula, where they raised their family together. Pat worked for several factories in the community. She never had a driver’s license, but that never stopped her from missing a day of work. One of her favorite things in life was being a member of the Sabula community. Living in Sabula her whole life, she took great pride in knowing everyone in town. Sabula residents could set their watch when Pat walked uptown to get the mail, go to the Restaurant, or stop by the Hop-N-Shop for a piece of candy. When she wasn’t at home, she snuck out to the penny slots, bingo, or for a quick dance at the VFW. She became Facebook famous during her days with Deb, always had perfect nails after days with Susie, and did almost everything with her daughter and roommate, Brenda. Surviving are her daughters; Brenda Wagner, Susie (Larry) Wagner, and Debbie (Terry) Daniels, and her stepsons; Charlie (Kathy) Funk and Mike (Margret) Funk. Later in Pat’s life, her daughters selflessly took care of her 24 hours a day, 7 days a week. Her grandkids and sons-in-law would like to especially recognize these three for the selfless dedication to providing their mother adventure, love, care, and comfort during the end of her life. Her greatest joys in life were the four who called her Grandma Funk; Matt (Megan) Daniels and Devin (Kendra) Daniels. Pat has six step-grandchildren; Brian, Brandon, Shannon, Marcia, Tracy, and Megan, and eight step-great-grandchildren; Elizabeth, Brice (his son Jackson), Natalie, Easton, Alyssa, Aaron, Livie, and Logan. Also, the family would like to thank a very loving friend, Kathy Corbin, and a son-in-law, Larry Wagner, for providing her friendship and laughter during their weekly visits over the past several months. Preceding her in death were her husband; George, her parents, sisters; Janice Williams and Peg Smith, son-in-law; Al Wagner, and two dogs; Ginger and Brandy. The family will receive family and friends at Law-Jones Funeral Home, Savanna, Illinois, from 8:00 a.m. until 10:00 a.m., Saturday, February 5, 2022. A service will be held at 10:00 a.m., in the funeral home. Burial will be held following the service at the Evergreen Cemetery in Sabula. The family invites you to a luncheon at the Sabula VFW following burial to celebrate Pat’s life. Donations in memory of Pat’s life are suggested to the family for a memorial bench in Sabula or the Sabula-Miles VFW Post 5234. Condolences may be expressed, and a photo tribute can be viewed at https://www.lawjonesfuneralhome.com.

The family of Elaine Patricia (Blenner) Funk created this Life Tributes page to make it easy to share your memories.

At her home, surrounded by her loved ones, Mrs. Elaine P. Funk,...