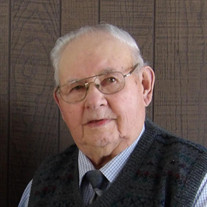 Edward Trenkamp, age 99, of Preston, IA, passed away Saturday, April 4th, at the Maquoketa Care Center in Maquoketa, IA. A private family funeral mass will be held at St Joseph’s Catholic Church in Preston with burial in Sugar Creek Cemetery. A celebration of life service will be held at a later date. Family and friends are invited to share in Edward’s life at lawjonesfuneralhome.com Ed was born on the family farm in Sugar Creek, son of Henry and Christina (Banowetz) Trenkamp. He was one of 19 children. Ed spent his youth working the land with his parents and siblings. After graduating from country school at Sugar Creek he worked for various farmers. In 1942 Ed was drafted into the army and became a member of the 3rd Infantry. He was deployed to Naples, Italy in 1944 and from there was sent to France and later Germany. He would look back at his service during WWII and state “I walked across France”. Ed was discharged in December of 1945 with the rank of Sergeant. He received numerous medals including the Bronze Star which he was very proud of. In 1946 he married the love of his life Lillian Medinger. Together they raised eleven children on the family farm in Sugar Creek. In 1982 Ed and Lillian moved to Preston. They celebrated their 74th wedding anniversary on February 18, 2020. While serving his country Ed was given the nickname “Farmer” by the men serving beside him. Coming back home to the family farm was always on his mind. In 2003 his farm became a “Century Farm”, being passed down through the family since 1903. Ed would still help harvest and plant even into his mid 90s. He was most at home driving a combine and tractor. Ed was a member of American Legion Post 602 of Preston for over 70 years. He was an instrumental part of the Avenue of Flags, and even made some of the flag poles himself. Before his passing Edward and his brother Frank were able to attend an honor flight together, something neither of the men would soon forget. Ed was a devoted husband, father, grandfather and great grandfather. He loved spending time with his family and looked forward to gatherings for holidays, birthdays and other special events. He especially enjoyed taking his children and grandchildren for ice cream. He enjoyed playing cards, watching the Chicago Cubs and Iowa Hawkeyes. Ed was a kid at heart. Ed had a deep faith which he instilled in his family. He demonstrated his faith every day with his words and actions. He was an active member of the Catholic Church in Sugar Creek and Preston. Attending mass and being involved in church activities was very important to him. In many ways Ed’s faith was the center of his life. Ed will be dearly missed by his wife Lillian and his children: Linda (Joe) Laban of Bernard, Iowa, David (Kathy) Trenkamp of Indianola, Gary (Linda) Trenkamp of Preston, Doris (Jamie) Boe of Aurora, Illinois, Elaine (Brian) Burken of Preston, Allan (Jenell) Trenkamp of Preston, Robert deceased (Elizabeth and Dean Krogman) of Clinton, Glen (Jolene) Trenkamp of Preston, Terry Trenkamp of Coralville, Jean (David) Dirks of Ames, Marlene (Mike) Rogers of Cedar Rapids, 34 grandchildren, 37 great grandchildren. He is also survived by two brothers Raymond and Leo Trenkamp and one sister Margaret Roling. Ed was preceded in death by 15 brothers and sisters, one son Robert, one granddaughter Angela and one great granddaughter Amy.

The family of Edward J. Trenkamp created this Life Tributes page to make it easy to share your memories.

Send flowers to the Trenkamp family.