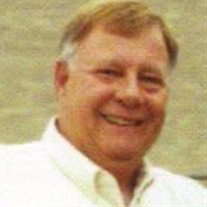 Edward F. “Pat” Murphy passed away peacefully at home in Clinton, IA early January 14, 2021, surrounded by family following a courageous battle with cancer. He and his wife were long-time residents of Savanna, IL. A visitation will be held Saturday, January 23, 2021 at the Law-Jones Funeral Home in Savanna from 3 to 6PM followed by a time of sharing and a brief Prayer Service. The service will be live on Facebook: https://www.facebook.com/groups/440676760389843 Pat was born January 12, 1945 in Hannibal, Missouri to Edward F. (Frank) and J. Darlene (Logerman) Murphy. He was a 1962 graduate of McCooey Memorial High School in Hannibal where he still holds the single game basketball scoring record for the Hannibal-Quincy area—56 points. He continued his education at Moberly Junior College (now MACC) where he played basketball for Lowell “Cotton” Fitzsimmons. The 1962-63 Greyhound team finished second in the Nation of the Junior Colleges of America. On August 29, 1964 Pat married Ann Wellman in Palmyra, MO and they moved to Kirksville where he attended what is now Truman State University. Together they raised three children and celebrated 56 years of marriage. He worked for the Burlington-Northern Railroad and the BNSF Railway for 34 ½ years starting in the Communications Department on the line crew. In August 1971 he was named District Lineman headquartered at Savanna, IL and the family relocated there. He finished his career as a Construction Foreman in the Telecom Dept March 1, 2005. Pat was a lifetime member of the Palmyra Council #1937 Knights of Columbus and a member of the International Brotherhood of Electrical Workers. He was a licensed IHSA and ASA official for baseball and softball. He was also President of the Losers Club at Poopy’s in Savanna. Pat will be dearly missed by his wife, Ann; son David (Kim Gregory) Murphy of Fulton, IL; daughter Erin (Chuck) Wiebenga of Fulton, IL; daughter-in-law Lora Murphy of Savanna; grandchildren Catie (Eric) Campbell, Natalie (Travis) Newcomb, Ashley (Ryan) Durward, Keegan, Kyle and Kasey Murphy, Patrick and Ian Wiebenga, Justin (Trista) Gregory and great-grandchildren Jackson, Carson, Easton and Kenley Newcomb, Cooper Campbell, Eliza and Max Durward and Harrison Gregory. He was preceded in death by his son Rob in 2019; granddaughter Candice in 2008 and both parents and parents-in-law L.A. (Unk) and Leola Wellman. Memorials may be made to the Savanna, IL or Fulton, IL Volunteer Fire Departments, or their Food Pantries.

Edward F. &#8220;Pat&#8221; Murphy passed away peacefully at home in Clinton, IA early January 14, 2021, surrounded by family following a courageous battle with cancer. He and his wife were long-time residents of Savanna, IL. A visitation... View Obituary & Service Information

The family of Edward "Pat" Murphy created this Life Tributes page to make it easy to share your memories.

Send flowers to the Murphy family.