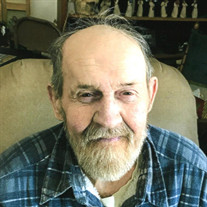 Edward W. Haring, age 82, of Shannon, IL, passed away Wednesday, November 18, 2020, at University of Wisconsin Hospital, in Madison, WI. A visitation will be held Monday, November 23, 2020 from 10am to 11am at Law Jones Funeral Home, in Savanna, IL. Burial, with a graveside service will follow at Savanna City Cemetery. Family and friends are encouraged to share in Ed’s life at lawjonesfuneralhome.com. In the interest of safety, certain members of the family will not be present for the public portion of the visitation, but friends of Ed are invited to come pay their respects. We will then gather in the funeral home parking lot to process in unison to the cemetery at 11am. Ed was born May 19, 1938, in Derinda Township, the son of Wilbert and Caroline (Stricker) Haring. Ed attended Derinda Country School, then went to work farming in the area, eventually making his way to Woessner Farms. He contributed more than 40 years of hard work on that farm, before his retirement. In 1960, Ed married Elsie Thulen. The couple went on to raise four children. Ed, or “Farmer” as he was affectionately called by his boys, grew up in the hills of the Derinda Valley, trapping and varmint hunting throughout his childhood; something he later shared with his children as they came of age. He loved attending local County Fairs with his family, and was a lifelong Chicago Cubs and Bears fan. As he settled into his retirement years, Ed found enjoyment tending to his flowers and watching and feeding the birds and squirrels. Ed will be dearly missed by his four children, Al (Tammy) Haring, of Monroe, WI, Ronald (Carlene) Haring, of Elizabeth, IL, Dale Haring, of Shannon, IL, and Steve (April) Haring, of Rochelle, IL; six grandchildren, Jarod, Brady, Isabella, Noah, Owen, and Molly; one great-grandchild, Aalayah; six siblings, Leona Meehan, of Victorville, CA, Harvey (Pat) Haring, of Fulton, IL, Donna Christen, of Lena, IL, Maxine Grauf, of Salem, MO, Robert (Barbara) Haring, of Lena, IL, and Marvin Haring, of Freeport, IL; brother-in-law, David (Brenda) Thulen, of Savanna, IL; sister-in-law, Linda Eley, of Mosinee, WI; and many nieces and nephews. Ed is preceded in death by his parents, Wilbert and Caroline; wife, Elsie; and sisters, Wilma Knapp and Virginia Haring.

Edward W. Haring, age 82, of Shannon, IL, passed away Wednesday, November 18, 2020, at University of Wisconsin Hospital, in Madison, WI. A visitation will be held Monday, November 23, 2020 from 10am to 11am at Law Jones Funeral Home, in Savanna,... View Obituary & Service Information

The family of Edward W. Haring created this Life Tributes page to make it easy to share your memories.

Send flowers to the Haring family.