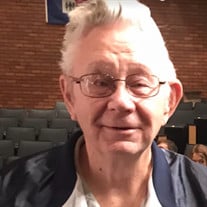 Edward C. Fehlhafer, age 85 of Lanark, IL passed away Saturday May 16th surrounded by loved ones at his home. A graveside funeral service with Military Rites will be held at the Lanark City Cemetery. A Celebration of Edward’s Life will be held at a later date. Memorials may be made out to Lanark American Legion Post #0357 or The Church of the Brethren in Lanark. Edward was born in Littleport IA, on June 30th, 1934, son of Clarence and Marie (Freitag) Fehlhafer. Edward attended McGregor High School in Marquette IA, and graduated with the class of 1952. After high school Edward enlisted in the United States Army, and served from 1954 to 1956 as Company Clerk. Soon after returning he met his wife Vonda Boleyn. It only took one date, by the end of the night Edward was smitten and told his mother, “I’m going to marry that girl.” Marry they soon did. Together they raised four children and celebrated 50 years of marriage until Vonda’s passing in 2009. After the loss of his wife Edward found a friend in Anne Lindsey. Both going through similar losses they were good for each other and spent 7 years together. Edward was the type of man who always had a lesson to teach or a bit of wisdom to impart. He was an LP department manager for Carroll Service Company for 43 years. There were many late nights when a call would come from a family needing something and Edward would always be there to help. He would often take a child to help with the work. Through his work ethic and sense of duty to his customers he taught his children and grandchildren hard work and the importance of honoring your commitments. Upon retiring from Carroll Service Company in 1998 Edward took a job with Sewer Equipment of America delivering sewer trucks and trailers all over the United Sates and into Canada and Mexico. Edward took Anne on many of these trips. He enjoyed showing her the countryside even when all of the sightseeing was thorough the windshield of the trucks he delivered. Edward had started his 22nd year with Sewer Equipment at the time of his passing. Edward served on the Lanark City Council from 2009-2017. He was honored to serve Lanark and always worked with the betterment of his community in the forefront. Edward never met a stranger and is most known for his hugs. He always hugged both sides when he hugged. It is known that cars would stop and ladies would jump out and run across the street to get a “both sides” hug from Edward. Edward will be dearly missed by his significant other Anne Lindsay; three children, Gary (Heidi) Fehlhafer of Sioux Center, IA, Tommy (Susan) Fehlhafer of Princeton, IL, and Susan (L. Benjamin) Chase of Pekin, IL; 10 grandchildren, Tel (Laura) Fehlhafer, Tyrel (Jeanette) Fehlhafer, Grace Fehlhafer, Hope Fehlhafer, Logan Fehlhafer, Samantha (Sean) Faulkner, Kasey Fehlhafer, Alexandrea Fehlhafer, Lyndsy (Andrew) Quanstrom, and Samuel Chase; five great-grandchildren, Graham, Raegan, Ryleigh, Hendrix, and Riley; Anne’s son Jeff (Ronda) Lindsay; Anne’s grandchildren Kadie (Michael) Lindsay, Rebecca Lindsay, and Tiffany Miller; Anne’s great-grandchildren, James, Maverick, Maddie, and McKenzie; and Ed’s sister, Vernelda Miehe of Elkader, IA. Edward is preceded in death by his parents, Clarence and Marie, his wife, Vonda, his son Donald and Anne’s son Scott.

Edward C. Fehlhafer, age 85 of Lanark, IL passed away Saturday May 16th surrounded by loved ones at his home. A graveside funeral service with Military Rites will be held at the Lanark City Cemetery. A Celebration of Edward&#8217;s Life will... View Obituary & Service Information

The family of Edward C. Fehlhafer created this Life Tributes page to make it easy to share your memories.

Send flowers to the Fehlhafer family.