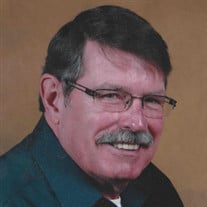 Edward Lynn Arb (Ed), resident of Hyland Crossing Assisted Living Facility, Sun Prairie, Wisconsin former resident of Savanna, Illinois, passed away peacefully on Wednesday, July 29, 2020 at the age of 78. Ed was born on February 22, 1942 to Harold William Arb and Margaret (Wilson) Arb in Savanna, IL. He learned to work hard from a young age, working the Savanna News Stand most every day, he would watch the different cars go by and fell in love with automobiles. He hung around the station and picked up odd jobs, just to learn about cars and the owner discovered Ed was good with his hands, he had a real eye for detail. He worked at the station on weekends, nights and in-between school and track practices. He had a real knack for the pulse and underlying symmetry of a wreck car, restoring it back to its former beauty. Ed graduated from Savanna Township High School in 1960, then he enlisted in the United States Navy. While on leave he proposed to his high school sweetheart, and married Joan Mildred Williston on December 30, 1962. Serving during Vietnam, Ed was assigned to the USS Bennington in the Air Anti-Submarine Squadron thirty-three unit. He excelled at hydraulics but enjoyed learning different skills sets. He and Joan wrote back and forth constantly, he loved traveling but missed her. The couple welcomed their first son, Randy while he was stationed out of Coronado, CA. Ed enjoyed working with his hands and when he was honorably discharge from the Navy in 1964, he enrolled in Washburne Trade School in Chicago, IL where he studied auto body repair while juggling work and family. Upon graduating from trade school in 1965, the family returned to Savanna, IL, where Ed worked as an Auto Body Technician. During this time Ed and Joan welcomed their other three sons, Ron, Harold Allan, and Eddie. Ed enjoyed learning the newest techniques in his field right up until his retirement at the end of 2004. Ed had a passion for the outdoors, nature, and taking in views of the world. In 1986, when he received his first 35 mm camera from his oldest son, he enrolled in classes. He had an eye for what to catch with his camera but wanted to learn the entire process including the development of the pictures. His passion grew into his side business he called A Point in Time, later, Ed Arb Photography. He loved taking pictures of the baseball teams, senior portraits, weddings, wildlife, families, and landscapes, especially the Savanna/Sabula bridge and Palisades Park. Ed was a member of The Savanna Art League. Many of his pictures were entered into art shows, where he won many awards including Best of Show. When Ed wasn't doing photography, or coaching his sons in baseball, he could be found on his Harley alongside his sons Allan and Eddie or riding with his Clinton Iowa Hog Chapter members, reminiscing about his early years of motorcycle racing. Ed was a member of the American Legion and the VFW Post 2223, where he served as commander of the honor guard for many years. He often volunteered his time driving veterans to their appointments in Iowa City with the VA van until 2013. Ed is survived by his wife Joan; his sons, Randy (Are’anne) Arb, Ron (Marcia) Arb, Harold Allan (Maya) Arb, Eddie Arb; honorary son Tymothy Williams; his grandchildren, Michelle (Stephen) Hassett, Kayla (Carlos) Vara, Jeffrey Arb, Ryan (Kayla fiancée) Arb, Justin Arb, Alex Arb, Alaina Arb; honorary grandchild, Kai Williams; great granddaughter, Darcy Hassett ; brother-in-law, John Williston, Sr; Nieces and Nephews, Jonna Marie (Roy) Capio, Susan Bell, John (Deanna) Williston II, Kathleen (Jaime) Goffaux; 2 great nephews, John David Williston, Emmitt Goffaux; Sister, Judy Arb of Arizona. In addition to his parents and parent in laws, Allan and Mildred Williston, he is preceded in death by his brother, Jerry; his daughter-in-law, Ann (Frost) Arb; his brother-in-law, Phillip Williston; sisters-in-law, Mary Alice Williston and Peggy Williston; his great niece, Ashley Goffaux; and his great nephew Tommy Goffaux. Services for Ed will be held at Law Jones Funeral Home, Savanna, Illinois on Saturday, August 8, 2020. Visitation will be held from 1:00pm to 3:00pm, followed by a service at 3pm. A graveside military service will be held at 10:30 Sunday, August 9, 2020 at the Savanna Township Cemetery after Ed has had his final “ride” with his sons. Cards maybe sent for Joan and family to Randy and Are’anne Arb, 800 Katherine Drive, Sun Prairie, WI 53590. In lieu of flowers, Ed would be honored if you would please consider donating to one of the following: Parkinson’s Research, Alzheimer’s Research, American Legion, or the VFW.

The family of Edward L. Arb created this Life Tributes page to make it easy to share your memories.

Send flowers to the Arb family.