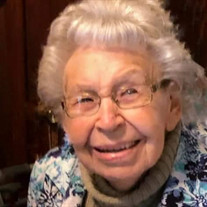 Edna Darlene Read of Mount Carroll, IL, formerly of Elizabeth, IL, passed away Monday, January 3rd, at Allure Nursing Home. A memorial service in honor of Darlene's memory will be held at a later date. Darlene was born June 14th, 1926, daughter of Everett and Leona Pearl (Chambers) Johns in Rippey, Iowa. She was the youngest of 8 children, where she got her nickname “Babe”. Her family moved to Elizabeth, where she attended and graduated from Elizabeth High School with the class of 1943. At an early age Darlene began working at a local restaurant in Elizabeth which she eventually bought and operated. It was at the restaurant where Darlene met the love of her life, Burton Read. They exchanged wedding vows on June 30th, 1944. Together Darlene and Burton raised one son and celebrated 43 years of marriage until Burton's passing in 1987. Darlene worked as a cook at the Elizabeth School for four years. She then began working for the Elizabeth State Bank, where she remained until her retirement. Darlene was an active member of her community. She served as Elizabeth Village Clerk for a period of time and helped with the Elizabeth Park Committee, organizing fundraisers and assisting with park projects. Darlene was a lifelong member of the Elizabeth United Methodist Church. She enjoyed helping with the churches famed Thanksgiving Dinners. She also supported the Vacation Bible School program by purchasing ice cream for the VBS party held on the last day. This tradition which she began will be continued by her family. Darlene loved to travel. Visiting Egypt, Australia, New Zealand, and Panama Canal. A favorite trip of hers was taking her family on a High School trip from Cumberland to five countries in Europe, including stops in Paris and France. In her spare time Darlene enjoyed china painting. She also enjoyed going with family and friends to Manny's Pizza in Savanna.. Darlene will be dearly missed by her son Dennis (Cindy) Read of Cumberland, MD; two grandchildren, Heather (David) Morgan of Cumberland, and Brian (Lauren) Read of Cumberland; and three great-grandchildren, Chad, Leigha, and Derek. Darlene is preceded in death by her husband, Burton Read; her parents, Everett and Pearl; and three brothers and four sisters.

The family of Edna Darlene Read created this Life Tributes page to make it easy to share your memories.

Send flowers to the Read family.