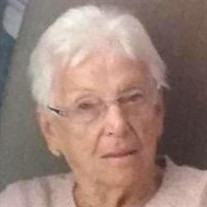 Edith Cate, age 96, of Thomson, Illinois died Tuesday, November 3, 2020 at MercyOne Medical Center, Clinton, Iowa. A family service will be held at a future date. Inurnment will be in Lower York Cemetery, Thomson. Edith was born November 22, 1923 in Arlington, MA, the daughter of William and Amy (Robart) Freeman. She grew up in the Boston area and is a 1941 graduate of Belmont High School. After high school, she worked at Brattle St. Savings Bank in Cambridge, MA, and then for John Hancock Insurance in Boston. By chance, Edith met a young sailor named Pat Cate from Thomson, Illinois, just prior to Pat going out to sea during WWII. After his return, Edith married Millard “Pat” Cate on June 23, 1946 in Thomson on the family farm. They raised five children and celebrated fifty-eight years of marriage until Pat’s death on November 3, 2004 in Pauline, SC. While living in Thomson, Edith worked at McBride’s Grocery Store in Thomson and National Lock Manufacturing in Savanna. She became the Thomson rural mail carrier, then the Thomson Postmaster for over ten years. After retirement in the early eighties, Edith and Pat moved to Titusville, Florida for almost 15 years before moving to Pauline, SC to live near their daughter Christine. After the death of Pat, Edith moved back to Thomson to live near her daughter Judy. They enjoyed many years as neighbors. Edith was an amazing artist, especially talented in oil painting and china painting. She was a member of the York Community Congregational Church of Thomson and a past member of the American Legion Auxiliary. Edith will be dearly missed by her children, Judith (Merrill) Beck of Thomson, Jonathan (Songa) Cate of Denver, North Carolina, Christine (Austin) McElhaney of Pauline, South Carolina and William (Diane) Cate of Gainesville, Georgia; 13 grandchildren; 17 great grandchildren; 4 great-great grandchildren; several step-grandchildren and step-great-grandchildren; her brother, William (Karen) Freeman of Barnstable, MA; 2 sisters-in-law, Norma Cate Durward of Thomson and Karen Freeman of Newbury Port, MA; and several nieces and nephews. Edith was preceded in death by her parents; her husband, Pat; a daughter, Susan Cate Hammer; her brother, Charles Freeman; her sister, Irma Forde; and 4 in-laws, Pete (Joyce) Cate, Cliff Durward, Mary (Warren Waltrip and Betty Smeltekop.

The family of Edith Cate created this Life Tributes page to make it easy to share your memories.

Send flowers to the Cate family.