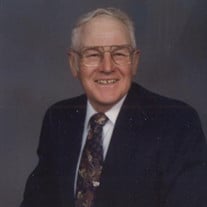 Earl Guenzler, age 89, of Elizabeth, IL, passed away Monday, October 19th, surrounded by his family at Mercy Medical Center in Dubuque, IA. Funeral Service will be held at 11:00 a.m. Saturday, October 24th, at the Hanover United Presbyterian Church in Hanover, IL. Visitation will be from 4:00 p.m. to 7:00 p.m. Friday, October 23rd, at the Law Jones Funeral Home in Elizabeth, as well as one hour prior to the service at the church. The funeral service will be streamed live at https://www.facebook.com/LawJonesFuneralHome/ In lieu of flowers donations can be made to St. Jude’s Hospital. Earl was born August 20, 1931, son of Ralph and Louise (Fahrion) Guenzler. He grew up on the family farm working side by side with his father. When he was of age Earl joined the United States Army, and served during the Korean Conflict. After serving his country Earl returned home, and met the love of his life, Joyce Winter. They were set up on two dates, the first being at a roller rink where Earl could show off his roller skating skills. After, Earl and Joyce were set to be a groomsman and bridesmaid at a friends wedding. It would be the first time they would walk down the aisle together, but not the last. In 1955 they became married. Together Earl and Joyce raised three children and celebrated 65 years of marriage. Earl was a great storyteller and jokester. He loved people and loved to talk. Earl would MC the Elizabeth Memorial Day Service as well as local fairs. If you caught him in his barn he would probably be practicing on the cows as he milked. Earl was also a talented harmonica player. He would play often at the Hanover VFW, and if you were lucky you would hear his most popular tune, Red Wing. Most important to Earl was his family and his faith. He taught sunday school for 25 years, and read either the bible or devotionals every night. Earl led by example. He would never speak ill of anyone and found the good in all people. Earl taught his children and grandchildren hard work, kindness, and honesty. These qualities will live on through his loved ones for generations to come. Earl will be dearly missed by his wife, Joyce Guenzler of Elizabeth; three children, Sharon (Dan) Virtue of Davenport, IA, Karen (Duane) Altfillisch, of Elizabeth, and Steven (Clairanne) Guenzler of Bettendorf, IA; ten grandchildren, 17 great-grandchildren, and one great-grandchild on the way; two sisters, Marcella Arnold of Elizabeth, and Carolyn Streicher of Freeport, IL; and one brother, Sherman Guenzler of Chadwick, IL. Earl’s family would like to thank the nurses at Mercy Hospital of Dubuque for their kindness and compassion.

The family of Earl Guenzler created this Life Tributes page to make it easy to share your memories.

Send flowers to the Guenzler family.