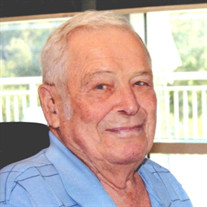 Dwight E. Wilkinson, 82, passed away on February 23 in Gulfport Mississippi, after a long battle with lung disease. Dwight was born in Thomson, Illinois and spent his early years working with his family on various farms around the Carroll County area. In 1959 he decided that he wanted to see the world and joined the U.S. Air Force. He did two tours in Vietnam where he was awarded the Distinguished Flying Cross for heroism and valor, saving a plane full of soldiers by keeping the plane moving and not coming under enemy fire. In 1963 whiled stationed in New Jersey he met and married Estella Keller. They had one son Michael Wilkinson. Dwight retired from the Air Force in February 1980 after serving his country for 21 years. After retiring from the Air Force he went to work for Lockheed Aircraft, as a teacher for the Arabian Air Force in Jeddah Saudi Arabia. In 1984 he returned home to Carroll County with his wife and son, building a home at Center Hill. He went to work for the Helle brothers in Savanna, Illinois working at both the sawmill and pallet company. Dwight and Ronny Miller seized the opportunity to buy Helle's Pallet Company when it closed in 1986 and together formed Standard Pallet Company. After six months in business Ronny sold his half to Harry Wilkinson, Dwight's brother and together they both ran Standard Pallet Company for the next 12 years in Thomson, Illinois. They sold the business in 1999 and retired. In 2003 Dwight and Estella decided to winter in Biloxi, Mississippi. Choosing a campground next to Keesler Air Force Base. While vacationing there, they met several of Dwight’s friends from his 21 years in the Air Force. They enjoyed their time there so much so that they spent the next 10 winters in Biloxi. After the passing of his wife in 2013, he continued to spend his winters in Biloxi. In 2017 he moved into the Armed Forces Retirement Home in Gulfport, Mississippi joining several of his friends who were already living there. Dwight loved to go camping and fishing. Having many different campers and boats through out his life. Spending most every weekend on a lake or river somewhere. He will be greatly missed by his family and many friends. Dwight was preceded in death by his Parents, Harry and Ellen (Stage) Wilkinson, Wife Estella (Keller) Wilkinson, Sister and Brother in Law, Alice (Wilkinson) Yeager and George Yeager, Brother, Harold (Gene) Wilkinson, Sister in Law, Velma (Foreman) Wilkinson, Sister in Law Betty (Holy) Wilkinson, Brother in Law, Lloyd Keller and Sister in Law, Mary Ellen (Keller) Self. Dwight is survived by; his Son, Michael Wilkinson and Son in Law, Brian Pierce, Brother, Harry Wilkinson, Sister and Brother in Law, Sharon (Wilkinson) Miller and Lawrence Miller, Sister in Law, Diane (Crotts) Wilkinson and Brother, Herb Wilkinson, as well as his many Nieces and Nephews. There will be a Memorial Graveside Service held 1:00 p.m. Saturday, June 20th in the Lower York Cemetery in Thomson, Illinois with a gathering at his Brother Harry’s home across the road from the cemetery.

Dwight E. Wilkinson, 82, passed away on February 23 in Gulfport Mississippi, after a long battle with lung disease. Dwight was born in Thomson, Illinois and spent his early years working with his family on various farms around the Carroll... View Obituary & Service Information

The family of Dwight E. Wilkinson created this Life Tributes page to make it easy to share your memories.

Send flowers to the Wilkinson family.