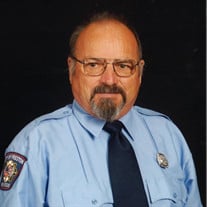 Dwayne D. Driscoll, age 77, of Preston, IA, passed away Thursday, May 27, 2021 at his home. A funeral mass will be held at 11:00 a.m., Thursday, June 3, 2021, at St. Joseph Catholic Church, in Preston, IA. Visitation will take place from 9am to 10:45am, that morning. Burial will follow at St. Joseph Cemetery. Family and friends are invited to share in Dwayne's life at lawjonesfuneralhome.com. Dwayne was born February 18, 1944, in Clinton, IA, the son of Sylvester and Mildred (Kilburg) Driscoll. He attended Preston schools, graduating from Preston High School with the class of 1962. In 1965, Dwayne joined the United States Army, serving until 1967. On November 15, 1969, he married Sharon Trenkamp at St Joseph Church, in Sugar Creek, IA. Oscar, as he was known to his friends and family, made a living as a truck driver; however, listing truck driver as his occupation would be a disservice. Oscar's occupation was a community servant. For 50+ years he has been an active member of the Preston Volunteer Fire Department. Oscar was also a founding board member of the Preston-Miles Community Ambulance Service. In addition, he was a lifetime member of the Knights of Columbus, as well as an active member of the American Legion Post 602 for over forty years. And finally, the one closest to his heart, was the work he did at St Joseph's Church in Preston serving as an usher, greeter, and Eucharistic minister. In lieu of flowers, the family asks that you make donations in his name to the organizations that Oscar served. Dwayne is survived by his wife, Sharon; sons, Joseph (Amy) Driscoll, of Seaford, VA and Johnny (Desiree) Driscoll, of Preston, IA; eight grandchildren; mother, Mildred Driscoll; brothers, Doug (Sandra) Driscoll, of Preston, IA and Dennis (Shirley) Driscoll, of Preston, IA; and sister, Darlene (Tom) Pint, of Janesville, IA. Dwayne is preceded in death by his father, Sylvester "Shorty" Driscoll.

The family of Dwayne D. Driscoll created this Life Tributes page to make it easy to share your memories.

Send flowers to the Driscoll family.