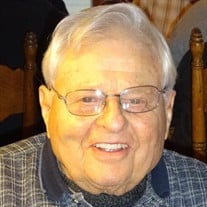 Duane Bryant “Shorty” Law was known as being a family-man and steadfast friend to many. He loved the farming life and cared deeply for those around him always showing generosity in the way he lived his life. At the age of 94, Duane passed away on Friday, December 10, 2021 at Allure of Mt. Carroll Nursing Center, Mt. Carroll, Illinois. Duane was born August 27, 1927 on a farm in Woodland Township, the son of Wilbert and Della (Spencer) Law. He was raised in farming as the family moved around Carroll County, attending the Paynter Country School near Milledgeville and graduating from Savanna High School with the Class of 1946. In these moves, he made great friends (like Pat McCue), not shying away from mischief but always having good clean fun. These were friends that he kept for a lifetime. He attended a dance at the Mt. Carroll High School, and it is there that he set eyes on and began a relationship with the love of his life, Dorothy Johnson. After High School, Duane enlisted in the US Army, serving in Italy and receiving an honorable discharge in 1948. On November 25, 1948, Duane and Dorothy were married at the Argo Fay United Methodist Church. They raised three children--Donna, Brad, and Tresa--and celebrated 52 years of marriage until Dorothy’s passing in 2001. Duane farmed near Mt. Carroll for 56 years, retiring in 2003. While the kids were young, the family enjoyed going to the Mississippi River every Sunday and later to Lake Carroll. Duane enjoyed dancing with Dorothy, hunting, fishing, boating, water skiing, swimming, and playing cards with the grandchildren at family events. He was an avid Bears fan, and his choice of tractors was the Case IH. Duane was a member of the Hickory Grove United Methodist Church, Jacobstown Community Club, 4 C’s Club, The Savanna Moose Lodge, and the couples card club (always playing Pitch). Duane will be dearly missed by two daughters, Donna (David) Bielema of Mt. Carroll and Tresa (Larry Randecker) Wilkinson of Stockton; his son, Brad (Sharon) Law of Mt. Carroll; seven grandchildren, Michael (Kristen) Bielema, Jason Bielema, Tonia (Ryan) Blair, Travis Wilkinson, Matthew Bielema, Cory Law and Tanner (Rachel Bicksler) Wilkinson; four great grandchildren, Rachael and Ethan Bielema and Carter and Rowan Blair; his loving brother, Lyle (Lois) Law of Mt. Carroll; and many nieces and nephews. Duane was preceded in death by his wife Dorothy, his parents, his brother Gervace, and special friend Wilma Knapp. A funeral service will be held at 1:00 p.m. on Friday, December 17, 2021 at the Law Jones Funeral Home in Mt. Carroll with Pastor Sun-Ah Kang of the Hickory Grove United Methodist Church officiating. Burial will be in Oak Hill Cemetery, Mt. Carroll. Visitation will be held from 4:00 – 7:00 p.m. Thursday, December 16, 2021 and one hour prior to the service at the funeral home.

Duane Bryant &#8220;Shorty&#8221; Law was known as being a family-man and steadfast friend to many. He loved the farming life and cared deeply for those around him always showing generosity in the way he lived his life. At the age of 94, Duane... View Obituary & Service Information

The family of Duane "Shorty" Bryant Law created this Life Tributes page to make it easy to share your memories.

Duane Bryant “Shorty” Law was known as being a family-man and...

Send flowers to the Law family.