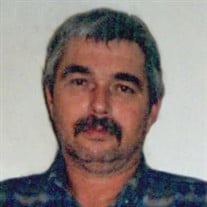 Douglas Heidenreich, age 66, lifelong resident of Sabula, Iowa went home to Heaven Tuesday, September 7, 2021 at MercyOne Hospital, Clinton, Iowa, after an extended battle with cancer. Doug greeted life each day with appreciation, enthusiasm and hard work. He was born in the Savanna City Hospital and attended Sabula Schools with the Class of 1973. Doug enlisted in the US Navy, serving in San Diego and aboard the ship, USS Midway. He gave his parents, Eugene Sr. and Barbara (Stoddard) Welch a run for their money, as he was described as having a wild-side when he was younger. All that energy was focused when he spent time outdoors. He loved hunting, including ducks, deer and pheasant and had an equal love of fishing and snowmobiling. Doug was fifteen when he figured out he had a crush on Pam Grundall, the girl from Savanna. They started dating and he would even find a way to call her during school, dialing up the old payphone in the Savanna school hallway. On January 7, 1974, Doug and Pam were married. They celebrated forty-seven years of marriage and raised five children. Doug worked for ADM for thirty-four years, retiring in 2020. He started out in construction and moved up to an operator. His fellow employees became like family and often would arrive at work hours early just to hang-out and spend time together. Living on the river brought him peace as he enjoyed watching the daily activity of boats, trains and barges. Doug lived for his family, especially the grandchildren, including Derrick, Summer, Dane, Dawson, Gracie and Chase. He enjoyed teaching about the outdoors, just like his dad did for him. Doug will be dearly missed by his wife, Pamela of Sabula; a son, Eric Heidenreich of Clarence, IA; three daughters, Janel (Charlie) Sedivy of Savanna, Kerry (Joe) Roling of Michigan and Heather (Chad) Zink of Savanna; six grandchildren; two brothers, Eugene, Jr “Coona” (Linda) Welch of Clinton and Steve (Terri) Welch of Sabula; two sisters, Julie (Jerry) Burman of Clinton and Penny Welch of Fairplay, Colorado. Doug is preceded in death by his son, Jeromy in 2005; his father Eugene in 2008; his mother Barbara in 2015; and a niece Samantha Welch. A Celebration of Life will be held 5:00 – 7:00 p.m. Saturday, September 25, 2021 at the Law-Jones Funeral Home in Savanna. Military Rites will be accorded at 6:30 p.m. A memorial has been established in his honor.

The family of Douglas Heidenreich created this Life Tributes page to make it easy to share your memories.

Send flowers to the Heidenreich family.