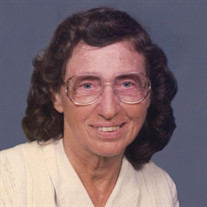 Dorothy Streicher, age 88, of Elizabeth, passed away Friday, January 15th, at Galena Stauss Nursing Home. A private family funeral service will be held. Dorothy was born August 20th, 1932, daughter of Oscar and Mae (Guinnip) Kleindienst. She grew up in the countryside of Missouri and Arkansas. As a young woman Dorothy became pen pals with the love of her life, Eugene Streicher. The couple married on March 15th, 1958, and Dorothy moved to Eugene’s home town of Elizabeth. Dorothy and Eugene raised one son, and celebrated 40 years of marriage until Eugene’s passing on October 27th, 1998. Dorothy and Eugene began their life together on the family farm, then moved to their house on Apple River road in 1973, a house Eugene had built himself for his bride. Even though they weren’t on the farm any longer, Dorothy was still a farmer’s wife. She loved to garden, and kept a rather large garden of both flowers and vegetables. She especially loved her flowers, specifically her Hibiscus. Dorothy also kept small animals from geese to pigeons, from ducks to chickens. She had always kept a pet dog since she was a little girl. In her later years she would exclusively raise dachshunds. Dorothy was excellent at crafts. She was an expert at crocheting, and shared that love with those close to her. She also liked working with ceramics. She took part in ceramics classes in Elizabeth. Dorothy collected salt and pepper shakers, so many that they could not all be displayed. Instead she showed her favorites in a decorative cabinet. Dorothy will be dearly missed by her son, Bruce (Maggie) Streicher of Elizabeth; sister-in-law Caroline Streicher; many nieces and nephews, and many friends. Dorothy is preceded in death by her loving husband Eugene, her parents Oscar and Mae, brothers-in-law Orrville Streicher and Laverle Streicher, and her sister-in-law Lavonne Lieb.

The family of Dorothy Streicher created this Life Tributes page to make it easy to share your memories.

Send flowers to the Streicher family.