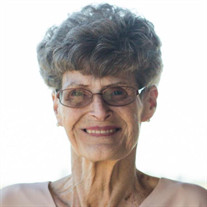 Dorothy Ann “Dort” Hoenicke, of Preston, IA, passed away Saturday, February 19th, at MercyOne Hospital in Clinton, IA. Funeral service will be at 12:00 p.m. Friday, February 25th, at St. John's Lutheran Church in Preston. Visitation will be from 10:00 a.m. to 12:00 p.m. prior to the service at the church. In lieu of flowers, memorials may be made to St. John's Lutheran Church, or to St Jude's Children's Hospital. Dorothy was born March 30, 1943, daughter of Elmore and Annie Mae (Hinton) Colson. As a toddler, Dorothy’s family moved from Eutaw, AL, to Fulton, IL, eventually settling in Clinton. Dorothy attended Clinton High School, and graduated with the class of 1961. While at a bowling alley one evening, Dorothy met the love of her life, Ronald Hoenicke. It was love at first sight. After dating for a short time the couple got married on May 19th, 1962. Together, Dort and Ronnie Ray raised two children and celebrated 47 years of marriage until Ronnie Ray’s passing in 2009. Dort was an avid bowler and card player. She and Ronnie Ray spent many evenings playing poker with their card club throughout the years. She also loved a day out, fishing with family and friends on the Mississippi. Her favorite fishing spot was up near Bellevue. Occasionally Dort like to play the Keno machine at a casino. Dort had a great work ethic. She had a “get it done right” kind of attitude. Dort instilled the values of hard work in her children and grandchildren. Dort worked breifly at the speaker factory in Sabula, IA, and then worked at the Hoenicke Cafe in Preston. She stayed at the cafe for 34 years, working with three generations of Hoenickes. More than anything, Dort loved her family. Her children and grandchildren were her entire world. She was known for being strict, but always kind, and fair. If Dort was anything she was a mother and grandmother. Dort’s family also included many close friends. Her house was the center of lots of social gatherings, and many garage parties. She kept a large and close circle of friends and loved to entertain, and socialize. Dort will be dearly missed by her two children, Teresa (Dan) Thiede of Camanche, IA, and Paul Hoenicke of Clinton; two grandchildren, Madeline Thiede of Savanna, IL, and Lucas (Kylie) Thiede of Camanche; two great-grandchildren, Karter Miller, and Tenlee Thiede; one brother, Jim (Kathy) Colson of Lawrence, KS; three nephews, Richard (Lynn) Williams of Concord, CA, Charles (Diane) Williams of Johnston, IA, and Kevin (Ellyse) Colson of Aurora, CO; and one niece, Brianne (Jeff) Wilson of Houston, TX. Dort is preceded in death by her husband, Ronnie Ray; parents, Elmore and Annie Mae; sister, Barbara; brother-in-law, Bill Williams; niece, Elizabeth; and nephew, Robert.

The family of Dorothy Ann "Dort" Hoenicke created this Life Tributes page to make it easy to share your memories.

Send flowers to the Hoenicke family.