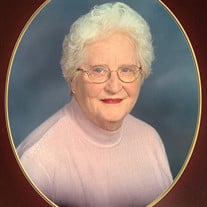 Dorothy Edna (Meyer) Bowman, age 86, originally of Elizabeth, IL passed away on Friday, May 15, 2020 at the Iris Memory Care facility in Edmond, OK. Dorothy was born November 8, 1933 to Paul and Edna (Campbell) Meyer and spent her early years in the Elizabeth area, graduating from Elizabeth High School. On December 26, 1955 she married Donald C. Bowman and they had three children together. The family moved from Illinois to Iowa, then Nebraska and eventually to Missouri where Dorothy worked as a computer programmer for Saline County. After retirement, they became full-time travelers in their recreational vehicle and thoroughly enjoyed their time together golfing, fishing and socializing with many friends and family members. After Don passed away in 1993, Dorothy moved to Florida. Dorothy was a member of numerous Catholic parishes over the years and dedicated a significant amount of time volunteering to help others in need, especially through involvement in St. Vincent de Paul and local food banks. She also contributed to the community through her work over the years as an election official in Nebraska, Missouri and Florida, ensuring polling places were properly and effectively serving the public. Her love of reading led her to help establish the Friends of the Marshall Public Library in Marshall, Missouri. Dorothy is survived by her daughter, Shari Bowman, sons, Don (Jean) Bowman of Marsing, ID and John (Kim) Bowman of Edmond, OK, numerous grandchildren, great grandchildren and many nieces and nephews. Dorothy is preceded in death by her parents; husband Donald C. Bowman, brothers Paul Brutus “Bud” Meyer and Ramon Charles “Ray” Meyer, sister, Ruth Audrey Bohnsack and brother-in-law Marvin Bohnsack. Due to the current coronavirus situation, a graveside burial service for the family will be held at the Evergreen Cemetery in Hanover, IL and a Mass will be scheduled to be said on her behalf at St. Mary’s Church in Elizabeth, IL. Donations to the Alzheimer’s Foundation of America or Society of St. Vincent de Paul are requested in lieu of flowers.

The family of Dorothy Edna Bowman created this Life Tributes page to make it easy to share your memories.

Send flowers to the Bowman family.