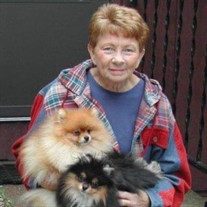 Donna M. Diephuis, age 81, of Thomson, IL, passed away Monday, April 20, 2020 at Iowa City Hospitals. A private family service will be held, with burial at Lower York Cemetery. In light of today's circumstances, a celebration of life gathering in Donna's honor will be held at a later time. A memorial fund has been established in her name. Family and friends are invited to share in her life at lawjonesfuneralhome.com. Donna was born September 11, 1938, in Elizabeth, IL, the daughter of Ernest and Emma (Klemm) Haas. She attended Thomson schools, graduating from Thomson High School with the class of 1957. In September of that year, Donna married Eugene Diephuis. Together, they raised two children and celebrated 54 years of marriage before Eugene's passing. Donna worked for Nielsen's for a number of years, and retired from JC Penney after over 30 years of service. But she didn't let retirement slow her down. She loved her clubs, like Card Club, Thomson Women's Club, Book Club, Red Hats Society, and in her and Eugene's younger years, they both enjoyed square dancing, and belonged to a trailer camping club called the Tagalongs Trailer Camping Club. She also found joy in less official groups and activities, like chair yoga,, bible study, and time spent with her "tongue twirler" gals. Donna was also very active in fixtures within the community, such as the library, where she volunteered much of her time, and the Thomson Depot Museum, where she served as their Landscape Artist, something at which she was especially skilled. She utilized these talents at home too, caring for her garden, and keeping up with her immaculate yard. It was not unusual to see her out mowing her lawn on nearly a daily basis. Her backyard animals loved her too, as they knew they would be fed rather well. Donna was a very special lady with a huge heart. She was a person who made an impression on everyone she met and would go out of her way to give you a helping hand, even if it involved getting on top of a roof. She had a great number of friends and a small family, but that small family was what she was most proud of. She adored her children and grandchildren, and kept everyone up to date on their lives and accomplishments. She truly loved them with every ounce of her being. Donna will be dearly missed by her son, Mark (Kristine) Diephuis, of Savanna, IL; daughter, Marla (Mike) Kozlowski, of Prescott, AZ; two grandchildren, Shanna Diephuis, of Morrison, IL, and Austen Diephuis, of Savanna, IL; and her dog, Cole. Donna is preceded in death by her parents, Ernest and Emma; husband, Eugene; brother Miles (Jeanette) Haas; and brother-in-law, John (Evie) Byers.

The family of Donna M. Diephuis created this Life Tributes page to make it easy to share your memories.

Send flowers to the Diephuis family.