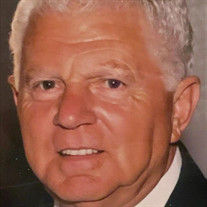 Donald Yoerger, age 79, of rural Bryant, Iowa passed away Sunday, January 24, 2021 at Genesis East Hospital, Davenport, Iowa. A funeral service will be held 1:00 p.m. Friday, January 29, 2021 at the Law-Jones Funeral Home, Preston. Visitation will be held from 10:00 a.m. – 1:00 p.m. Please dress casually. COVID protocols of social distancing and mandatory masks will be in place. Burial will be in St. Mary Cemetery, Bryant. Pallbearers will be his grandchildren. You may watch the service from home on the Law-Jones FB Live Group. Don was born June 22, 1941 at home on a farm near Springbrook, the son of Richard and Helen (Medinger) Yoerger. He attended Jackson #5 Country School, between Bellevue and Springbrook. On May 25, 1961, he married Bernadette Reuter at Sugar Creek St. Joseph Catholic Church. They were blessed with 6 children and celebrated 36 years of marriage. Bernadette preceded him in death in November 1997. Don started his career in trucking as an owner operator, hauling milk from farm to dairy. Later he decided to become a company driver pulling tanks, flatbeds and vans. He enjoyed having a bag of homemade popcorn in the cab with him on his long trips. After officially retiring he went back to trucking part time hauling grain locally. Don was no frills, straight-forward and to-the-point. As a Dad, he was firm and taught his kids that the words you say need to be followed by your actions. He also believed in having fun, especially with family. They enjoyed sitting around campfires, trail riding with horses, and working on antique tractors. Don will be dearly missed by his family. He is survived by his 6 children, Crystal Kelly of Blue Springs, Missouri, Laurie (Jim) Sparks of DeWitt, Sheryl (Ike) Lind of Camanche, Craig (Julie) Yoerger of Bennett, Brent (Lynette) Yoerger of Clinton, and Stephanie (Chad) Wiese of Camanche; 13 grandchildren; 2 step grandchildren; 11 great-grandchildren; 5 step great-grandchildren and 1 great-great grandchild; 2 sisters, Nancy Jacobs of Springbrook and Judy James of Camanche; a brother Larry (Donna) of Charlotte and a sister-in-law, Sharon Yoerger. Don is preceded in death by his wife, Bernadette; a granddaughter, Kristina; a grandson, Hunter; a great Grandson, Andrew; 2 brothers, Leonard and Richard, Jr.; a brother-in-law, Marvin and a special friend of many years, Marilyn Lee. Don's service can be viewed live by visiting: https://www.facebook.com/groups/1011071292751323

The family of Donald Yoerger created this Life Tributes page to make it easy to share your memories.

Send flowers to the Yoerger family.