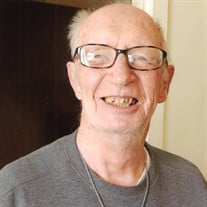 Donald “Woody” P. Larsen, age 76, of Savanna, IL, passed away Tuesday, November 9, 2021 at Big Meadows Nursing Home, in Savanna. A funeral service will be held Sunday, November 21, 2021 at Law Jones Funeral Home in Savanna, at 3pm. Visitation will take place from 1pm to 3pm before the service. Burial will follow at Savanna Township Cemetery. Following the burial a memorial luncheon will take place at Manny’s. Family and friends are invited to share in Woody’s life at lawjonesfuneralhome.com. Woody was born September 11, 1945, in Savanna, IL, the son of Axel and Elsie (Welker) Larsen. He attended local schools, graduating from Savanna High School with the class of 1963. Woody then enlisted in the United States Air Force, proudly serving his country until his honorable discharge in 1967. From there, he attended Rock Valley Community College, earning his associates degree. Next came a dark chapter in Woody’s life. Tragedy struck when he was involved in an automobile accident, putting him into a coma. He was given low odds of ever returning to the type of life he once knew. Upon awaking from the coma, Woody still faced an uphill battle of rehabilitation, and after nearly a year in the hospital, he was able to return home. True to his character, Woody never gave up, and diligently continued outpatient rehab until he was able to work again, as a maintenance man for multiple companies. On May 6, 1989, Woody married Debora Price. They enjoyed nine happy years living in Rockford, IL., before her passing in 1997. After his retirement, Woody returned home to Savanna, IL, where he graciously cared for his aging parents. Woody was a member of First Baptist Church of Mt. Carroll, and will be remembered as a friend to all. He quickly endeared himself to everyone he met, with his upbeat attitude and kind heart. He was a brilliant writer, writing poems for family milestones and events, and was a talented pool player. It might take him an extra minute to walk around the table, but once that cue was lined up, he was sinking his shot! He also enjoyed poker and darts, and competed in dart and pool leagues and tournaments. These past times of his became even more special when he could combine them with what he loved most; his family. Woody will be dearly missed by his four sisters, Barbara Trousdale, of Rockford, IL, Wilma (Robert) Acuff, of Savanna, IL, Donna (John) Grimm, of St. Peters, MO, and Paula (Rob) Brown, of Genoa, IL. He is preceded in death by his parents, Axel and Elsie; wife Debora; sisters, Doris Schupbach and Karen Tillquist Sandoval; four brothers-in-law, Duane Schupbach, Stanley Trousdale, Warren Tillquist, John Sweeney.

The family of Donald "Woody" P. Larsen created this Life Tributes page to make it easy to share your memories.

Send flowers to the Larsen family.