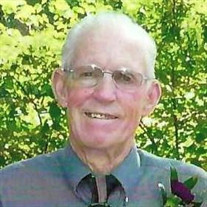 Donald Weidman, age 98, of Savanna, and previously of Mt. Carroll and Morrison passed away at home Wednesday, June 1, 2022. The funeral service will be held 3:00 p.m., Sunday, June 5, 2022, at Law Jones Funeral Home in Mt. Carroll, Illinois. A visitation will be held prior to the funeral service from 1:00 p.m. – 3:00 p.m. at the funeral home. Burial will take place in Oak Hill Cemetery, Mt. Carroll. Memorials can be made to FHN Hospice. Family and friends who cannot attend and wish to watch the livestream may do so at this link, https://www.facebook.com/groups/1010040592974287. Donald was born on October 15, 1923, near Mt. Carroll, the son of Ward and Blanche (Merchant) Weidman. Donald attended country school and was a 1941 graduate of Mt. Carroll High School where he played the trombone in the band, ran track and was a member of the FFA. As a FFA member, Donald always tried to beat the Law boys at showing sheep. Donald married Suzanne Martindale in 1948. He later married Lorraine Hoogheem in 1971. Together, they raised a blended family and celebrated 39 years of marriage. Lorraine passed away on January 17, 2010. Donald was a dairy farmer near Morrison for over 40 years. He and Lorraine moved to Mt. Carroll in 1985 where he farmed for over 30 years and retired in 2015. He then moved to Savanna to live with his daughter, Barb and Kevin Reibel. Throughout his farming career he always loved his cows and enjoyed milking. “There were good years and bad years but there was always a milk check.” All his kids got an education on the farm and learned about working hard and a lot about responsibility. Donald was a member of the Mt. Carroll Lions Club, the Masonic Lodge, and the Mt. Carroll Methodist Church. Donald enjoyed fishing in Wisconsin and on the Mississippi River. He was an avid card player, playing poker with the guys and loved a good game of Euchre. He was proud of his asparagus farm, selling his asparagus to restaurants and farmer’s markets and his asparagus even earned him an appearance on the Paula Sand’s show. Donald is survived by one son, Doug Weidman of Mt. Carroll; four daughters, Julie (Bob) Zuidema of Morrison, Donna (Paul) Parker of Fulton, Lorie (Tom) Hartman of Fulton and Barb (Kevin) Reibel of Savanna; two stepsons, Craig (Cindy) Hoogheem of Morrison and Steve (Terri) Hoogheem of Clinton, Iowa; nine grandchildren; twelve great grandchildren; and a sister, Velma Stein of Milwaukee, Wisconsin. Donald is preceded in death by his wife, Lorraine; a stepson, Bart Hoogheem; two grandsons, James Miller and Doug (Dude) Weidman; two sisters, Leonor Derrer and Lois Toepfer; and his parents.

The family of Donald Weidman created this Life Tributes page to make it easy to share your memories.

Donald Weidman, age 98, of Savanna, and previously of Mt. Carroll...

Send flowers to the Weidman family.