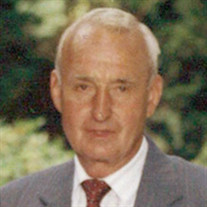 Donald W. Thoren, age 91, of Elizabeth, IL, passed away Tuesday, January 25th at Finley Hospital in Dubuque, IA. A celebration of life will be held at a later date in honor of Don. Currently, the family invites all to share in his life and countless memories at lawjonesfuneralhome.com. He was born October 9, 1930, in Freeport, IL to Emmert and Alice (Daacon) Thoren. He attended Stockton schools, graduating from Stockton High School with the class of 1949. During his school years Don was an active member in both the local 4H club and FFA chapter. Once graduated, Don immediately went to work for a local farmer, officially beginning his career that would serve him well for many decades to come. Donald and Luella (Randecker) Thoren married on June 5, 1955, at Derinda Trinity Lutheran Church. The young couple began their lives farming on shares with a local farmer in the Derinda area. In 1966, they purchased their property in Massbach where they built their forever home and farm. Don was born to be a farmer and poured everything he had into his family, his land and his livestock. He raised hogs and Polled Hereford beef cattle, as well as always had a deep appreciation for Mother Nature and all of God’s creatures. Don was an active member in this community, serving as a township road commissioner, on Derinda church council and the Jo Daviess County Soil and Water Board. He received the State Conservation Farm Family of the Year Award in 1973. In his younger years Don enjoyed playing fast pitch softball, bowling, fishing and hunting. A favorite of Don’s was his trip to Hawaii and visiting Pearl Harbor. He loved restoring John Deere two cylinders, tinkering in his shop, wood working, welding, was an avid sports fan, enjoyed history and reading to his grandchildren and great-grandchildren. Don was preceded in death by his parents, brothers John and Robert Huisinga, and sister, Sarah Ilgen. He is forever loved and dearly missed by his wife, Luella, three sons Michael (Brenda), Greg (Janis) and Kelly (Michele). Grandchildren Julia (Ben) Blair, Neil Thoren, Chris (Mollie) Thoren and Jen Thoren. Great-grandchildren Anna Blair, Camille and Madeline Thoren.

Donald W. Thoren, age 91, of Elizabeth, IL, passed away Tuesday, January 25th at Finley Hospital in Dubuque, IA. A celebration of life will be held at a later date in honor of Don. Currently, the family invites all to share in his life and countless... View Obituary & Service Information

The family of Donald W. Thoren created this Life Tributes page to make it easy to share your memories.

Send flowers to the Thoren family.