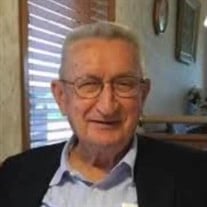 Donald Gene “Swany” Swanson, age 84, of Shannon, Illinois passed away, Friday, January 28, 2022 at home surrounded by his caring family and FHN Hospice. A Celebration of Life will be held 10:00 – 11:30 Saturday, March 19, 2022 at Bethel United Methodist Church, Shannon. Masonic Rites will be held at 11:30 followed by a memorial service at 12:00 noon. Law Jones is in charge of arrangements and friends and family are encouraged to share in Don’s life at lawjonesfuneralhome.com. You may also view these events on FB Live at Law Jones, or anytime thereafter at the following link http://bit.ly/32JUYSF. Memorials may be made in Donald's memory to the Shannon Lions Club, the Shannon Fire Department & Ambulance, and the Shriner's Hospital. Donald was born May 10, 1937 in Morrison, the son of Roy and Elizabeth (Montgomery) Swanson. He grew up on a farm. He learned to appreciate family as they lived through several hardships. He attended Fulton Schools and continued to work on the farm. On April 6, 1954, Don married Doris Zuidema. They raised four children and have celebrated 67 years of marriage. After all these years you can say, “They made it!” As a salesman most of his life, Don met many customers who became friends. He sold Insurance, starting-out with Country Companies, then formed Swanson Insurance Agency in Shannon until 1986. He worked in various positions for Bocker Auto Group Freeport, Stockton and Mt. Carroll. Most recently he sold ads for WCCI Radio since 2004. Throughout the years Don was active in many community events and clubs, including the Shannon Volunteer Fire Department, Lions, Masonic Lodge and Shriner’s T-Tens. He was a referee for high school sports and served on the Carroll County Board, serving as chairman for several years. For the past 30 years he was a friend of Bill W. Don made a difference in his lifetime using his love for others, compassion and caring. He will be missed. His family was very important to him, and he loved being a Grandpa the most. Don will be dearly missed by his wife, Doris; four children, David Swanson (Mary Seefeldt) of Freeport, Dale Swanson of Shannon, Darlene (Don) Vock of Polo and Douglas (Debra Wimmer) Swanson, Ed.D of St. Louis, MO; eleven grandchildren, Ian, Sadie, Maggie and Emmit Seefeldt-Swanson, Taylor, Dustin (Jordan) and Morgan Vock, Angela (Joshua) Bosse, Tiffany (Chris) Kuroda and Sam Swanson; six great grandchildren, Jacob Hudler, Josiah and Isaiah Bosse, Tyler Jensen, Abby and Trinity Kuroda; two brothers-in-law, Daniel Zuidema and Donald Venema; and many nieces and nephews. Don is preceded in death by his parents; a sister, Eleanor Larson Nice, three brothers, LeRoy, Howard and Les Swanson; and a granddaughter, Molly Seefeldt-Swanson.

The family of Donald Gene (Swany) Swanson created this Life Tributes page to make it easy to share your memories.

Send flowers to the Swanson family.