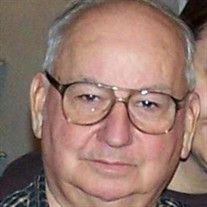 Donald L. Price, age 87, Master Storyteller, previously of Clinton, IA and Elizabeth, IL passed away peacefully Monday, November 22, 2021 at the Hawkeye Care Center in Dubuque, IA. A funeral service will be held 11:00 a.m. Wednesday, December 1, 2021 at Law Jones Funeral Home in Elizabeth, with burial in the Elizabeth Cemetery. Visitation will be held 4 – 7 p.m. Tuesday, November 30, 2021 at the funeral home and one hour prior to the service. A Masonic Service will follow visitation at 7:00 p.m. on Tuesday. Donald was born June 9, 1934, in Freeport, Illinois, the son of Roy and Geneva (Hayes) Price. He is a 1952 Elizabeth High School graduate. At the age of 22, Don became a member of the Masonic Lodge. He believed its teachings helped him in life. He was a great storyteller, leaning in and keeping your attention. His stories included friends, family and the real goings-on around his life. Anyone who met him knew they had an immediate friend to share stories. Don was known for owning the Price Logging and Export Co. for many years, and later in life, restoring old antique tractors. He also worked as a heavy equipment operator and miner before founding Price Logging. He received widespread recognition for his work with Water Ram technology. If there was a problem, Don wanted to be in on the solution. He has enjoyed sobriety for 51 years through the Grace of God and AA. Donald will be dearly missed by his son Scott (Debra) Price of Galena; his daughter, Dawn Price of Platteville, Wisconsin; son-in-law, Patrick Cummings of Sierra Vista, AZ; two grandchildren, Marie and Andrew Freese; and a brother, Lloyd Price of New River, AZ. Don is preceded in death by his parents; a sister Luella Price of Salem, Oregon; a brother Robert; and a sister-in-law, Annie Price.

The family of Donald L Price created this Life Tributes page to make it easy to share your memories.

Send flowers to the Price family.