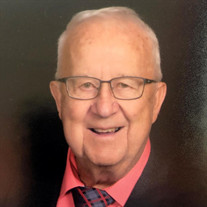 Donald “Butch” Mantzke just hit a fairway wood to the green, for a birdie putt, after a long straight drive. At the age of 88, and after a courageous battle with Parkinson’s, Don passed into the arms of his Lord, with his loving family by his side on Sunday, March 29, 2020. He was a genuine, loving and dedicated Grandfather, Father, and Husband, who enjoyed sharing his sense of humor and passion for life. Don was born in a farm house near Winslow on September 30, 1931, the son of John and Gladys (Meacham) Mantzke. He grew up knowing the value of a penny and lived an idyllic childhood in Lena, playing baseball with his friends and helping his dad as he operated a local tavern called the Lena Tavern. Don is a 1951 graduate of the Lena High School. Don served his country in the US Army during the Korean War with the 398th Engineering Battalion based out of Fort Leonard Wood, Missouri. He went on to graduate from Carthage College in 1957. On April 1, 1961, Donald married the love of his life, Judith Kunkle in Rockford. They raised two children and celebrated almost 60 years of marriage. Don was a dedicated school teacher and administrator for 39 years in the Shannon/Eastland School District. He was a member of the Shannon American Legion for over 50 years and served as Commander several times. He served on the Shannon Volunteer Fire Department for 13 years. Don was a member of Bethel Methodist Church in Shannon most of his life, serving on many committees. He also served on the Carroll County Board for many years, and the Cherry Grove Shannon Township Board and was Township Clerk for over 25 years. Don loved, and was loved, by his family, friends and thousands of students whose lives he helped develop over the years. He had a huge heart and would often share his wisdom through songs or sayings that were memorable. He was a sports enthusiast, both as a participant and coach, winning the first Eastland Basketball Girls Regional in 1990. He never missed his children’s and grandchildren’s sporting events, including baseball, football, basketball, soccer, softball and volleyball, and was proudest to watch as Eastland, and his grandkids participated on several winning teams. In his younger years he enjoyed bowling. When he wasn’t coaching, teaching, or rooting on a sports team, Don could be found teaching his grandchildren how to golf, fish, or just mowing the lawn. He loved golfing with friends and enjoyed shooting a 69 on his 69th birthday, and has since golfed his age many times. Don would say, “There is always time for a game of Euchre.” He loved playing cards with family and his men’s poker group. Don will be dearly missed by his wife, Judith of Lake Carroll; his son, David (Julie) Mantzke of Somonauk, Illinois; his daughter, Amy (Matthew) Jones of Lake Carroll; six grandchildren, Doris, Nelson and Grant Mantzke, Adam (Elizabeth) Young, Austin Young and Gabrielle Snyder; his first great-grandchild on-the-way; and his sister, Kathryne “Kate” Warthen of Lena. Don is preceded in death by his parents and his sister, Jeanne. A private family service will be held Friday, April 3, 2020 at Bethel Methodist Church in Shannon. Burial will be at Chapel Hill Cemetery, Freeport with Military Rites. You may watch the service on Facebook Live at 11:00 a.m. Friday, or listen from the Church or Funeral Home websites in the near future. The family is hosting a visitation from 4:00 – 7:00 p.m. Thursday, April 2, 2020 at Bethel Methodist Church in Shannon. If you wish to attend, please remain in your vehicle, forming a line. An attendant will direct your family to enter at a time to keep proper spacing, to eliminate person-to-person contact, while still being able to pay your respects to Donald. In Don’s memory, a memorial fund has been established.

Donald &#8220;Butch&#8221; Mantzke just hit a fairway wood to the green, for a birdie putt, after a long straight drive. At the age of 88, and after a courageous battle with Parkinson&#8217;s, Don passed into the arms of his Lord, with his... View Obituary & Service Information

The family of Donald "Butch" Mantzke created this Life Tributes page to make it easy to share your memories.

Send flowers to the Mantzke family.