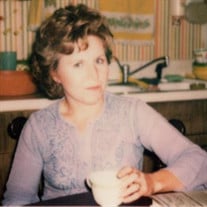 Dixie L. Gayton, age 78, of Loves Park, IL, passed away in her home Thursday May 28, 2020. A public visitation will be held at Law Jones Funeral Home in Elizabeth, IL from 10am to 12pm on Tuesday, June 2, 2020, with a private funeral service, and burial at Zion Presbyterian Cemetery, to follow. Memorials may be made to Zion Presbyterian Cemetery. Dixie was born July 12, 1941 in Derinda Center, IL, the daughter of Harold and Lois (Stadel) Wills. She attended Elizabeth schools with the class of 1959. She went on to marry Bill Miller, with whom she had 4 children, and then later marry Tony Gayton, with whom she had two children. Dixie was always a hard working woman, offering her services to many employers throughout her life, including Little Fuse, Motorolla, Century 21, Tanaka, and Walmart. She also did freelance house cleaning for a number of years. Dixie’s life was full of twists and turns, and those who knew her will forever remember how she found joy along every step of the way. She had a delightful sense of humor that was simply infectious. A source of perpetual optimism, she carried her playful demeanor with her wherever she went. If you ever ran into her while she was out and about, the two of you probably had at least a five minute conversation, and you certainly walked away feeling as though your day had just been brightened. She could make a friend out of anyone, regardless of any potential differences. She instilled this in her children as well, teaching love, empathy, and acceptance for all. She truly had a welcoming and sweet spirit. She didn’t stop at just showing love, however. She took it to the next level with her great penchant for generosity and thoughtfulness. A supremely talented cook, Dixie apparently saw it as her responsibility to share her talents. Frankly, she practically fed the entire neighborhood. She loved her children (and all children, for that matter) dearly, and always was certain to make them feel special around birthdays and holidays, with thoughtful cards and well wishes. When life would take a tough turn, she was ever-present, ready to help guide her kids through the storm. Cooking was far from her only talent. She was a majorette in high school, dabbled in ceramics, and could probably beat you in Bunco and Sequence. In her child-raising years she became an accomplished seamstress, often sewing clothing for herself and her children. Halloween was made extra special by her custom-created costumes. She also had a love of interior decorating, and was quite good at it. Hunting for the right piece to complete the room was one of her favorite past times. Dixie was also quite the traveler. Her adventures included trips to Mackinaw Island (which she adored), Alaska to visit her son, and two places that always captivated her; the Hoover Damn and the Grand Canyon. Later in life she became quite fond of her trips to Branson, MO. There she spent many nights listening to live music, often seeing the Oak Ridge Band. And speaking of music, her prized possession in life was her Liberace autograph! Dixie will be dearly missed by five sons, Mike (Diana) Miller, of Hanover, IL, Russel Miller, of Savanna, IL, Scot Miller, of Elizabeth, IL, Jeff Miller, of Anchorage, AK, and Robbie (Tammy) Gayton, of Hanover Park, IL; one daughter, Deanna Gayton, of Rockford, IL; life partner, Blaine Phillips, of Loves Park, IL; eight grandchildren, Joshua (Paige) Miller, Jeremy (Ashly) Miller, Kayla (Cody Graves) Miller, Thomas Miller, Nicholas Miller, Danielle Miller, Fallon Miller, and Emmelyn Peterson; four great grandchildren; and a brother, Wayne Wills, of Hanover, IL. Dixie is preceded in death by her parents, Harold and Lois; three sisters, Sandra (Gordon) Wilkinson, Bev (Elmer) Forrest, and Bonnie (Tony) Cantu; and a sister-in-law, Fran Wills.

Dixie L. Gayton, age 78, of Loves Park, IL, passed away in her home Thursday May 28, 2020. A public visitation will be held at Law Jones Funeral Home in Elizabeth, IL from 10am to 12pm on Tuesday, June 2, 2020, with a private funeral service,... View Obituary & Service Information

The family of Dixie L. Gayton created this Life Tributes page to make it easy to share your memories.

Send flowers to the Gayton family.