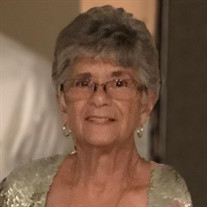 Diane Kalec, age 80, of Thomson, IL, passed away Thursday, February 27th, 2020. A Celebration of Life will be held from 1:00 pm to 4:00 pm on Saturday, March 7th, at the Law Jones Funeral Home in Thomson. A memorial fund has been establish, and will be welcomed at the service. Diane was born in Chicago, IL, on January 19th, 1940, daughter of George and Mary (DeFransico) Koston. Her childhood was spent in Chicago. She would graduate from Gage Park High School in Chicago 1958. On May 30th, 1959, Diane married Douglas Kalec. The couple celebrated 52 years of marriage until Douglas’s passing in 2012. Diane would split her time between Chicago and Thomson. She met George Brown in Thomson, and the two became quick friends. They lived together at the current residence on Riverview. Diane was a woman of many talents and many interests. She could do most anything or learn whatever was needed. She was a talented cook and baker. Whatever she made was the “best you ever had.” She was known for her pistachio cake, carrot-cake, and especially her “bacon buns”. These were always the best delights at every gathering. Diane was a master when it came to quilting, sewing, crocheting, and anything involving a needle and thread. She would make quilts, blankets, and clothes for gifts on holidays and birthdays. A family tradition began when Diane turned her wedding dress into a christening gown. The gown was used at many family christenings. On top of cooking and sewing, Diane was an avid gardener. The garden at her home in Thomson was a point of pride for Diane. Her and George, would spend hours every spring and summer tending to the flowers and vegetables, and come harvest, would offer them at their home. Most important to Diane was being a mother and grandmother. Each of her children and grandchildren had a close personal relationship with her. She had a way of making everyone feel special, like they were the center of her life. Her family will be carrying on these nurturing and loving traits long into their family’s future. Diane will be dearly missed by her two sons, David (Patricia) Kalec of Plainfield, IL, and Daniel Kalec of Chicago; three grandchildren, Joseph Kalec of Plainfield, Kristie (Joe) Heerlein of Naperville, IL, and Derick Kalec of Plainfield; one great-grandson, Jackson Heerlein of Naperville; and one sister, Mary Lou (Jerome) Oprondek of Orland Park, IL. Diane is preceded in death by her daughter, Denise, her late husband Douglas, sister, Sandra and her parents, George and Mary.

Diane Kalec, age 80, of Thomson, IL, passed away Thursday, February 27th, 2020. A Celebration of Life will be held from 1:00 pm to 4:00 pm on Saturday, March 7th, at the Law Jones Funeral Home in Thomson. A memorial fund has been establish,... View Obituary & Service Information

The family of Diane M. Kalec created this Life Tributes page to make it easy to share your memories.

Send flowers to the Kalec family.