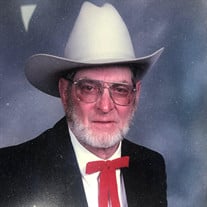 Denver Sr and Ida (Krauss) Traum gave birth to Denver Conrad Traum on October 26, 1932 in Lanark IL. The parents moved around a little bit before settling down east and south of Milledgeville Il. It was here that his love for horses began to... View Obituary & Service Information

The family of Denver Conrad Traum Jr. created this Life Tributes page to make it easy to share your memories.

Send flowers to the Traum family.