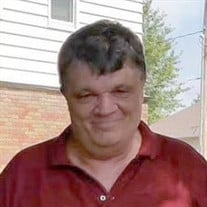 Dennis “Big Mac” Yaddof, age 62, of Preston, IA, passed away Friday, March 26th, at Genesis East Medical Center in Davenport, IA. A funeral service will be held at 11:00 a.m. Thursday, April 1st, at the Law Jones Funeral Home in Preston. Visitation will be held from 5:00 p.m. to 8:00 p.m. Wednesday, March 31st, at the funeral home, as well as one hour prior to the visitation. Dennis was born April 15th, 1958, son of Norman “Chatter” and Jeanne (Ready) Yaddof. He was the oldest of four boys. In high school Dennis was an exceptional athlete, exceling in football as a running back, as well as track and field. He graduated from Preston High School with the class of 1976. Soon after Dennis married Deb Smithson in 1979. Together the couple had two children. They later divorced. Dennis was a hard worker. When he was 17 Dennis had to lie about his age to get a job hauling milk, but it didn’t stop him. Dennis was a trucker for most of his life, working for Vern Cambell and later working for Bob Johnson Trucking as well as Henningsen Brothers. Every week he would be taking cattle from Preston to Philadelphia, loading calves back into his truck, and bringing them back. Or some weeks he would be taking pigs to Virginia Beach and New Jersey. When Dennis’s parents became ill, he got off the road and stayed in Preston to care for them. When he wasn’t working, Dennis liked spending time with family and friends. He was also a member of the American Truck Historical Society. Dennis will be dearly missed by his two children, Shawn (Danie Klosterman) Yaddof of Preston, and Tara (Brandon) Hansen of Miles; six grandchildren, Lane, Makinley, Paige, Emma, Carver, and Adley; and three brothers, Danny (Nancy) Yaddof of Preston, Dougie Yaddof of Preston, and David (Janell) Yaddof of Bellevue. Dennis is preceded in death by His parents, Norman and Jeanne; three aunts, Linda, Cindy, and June; his Grandparents Harold and Reva; and Elmer and Norma Yaddof.

The family of Dennis "Big Mac" Yaddof created this Life Tributes page to make it easy to share your memories.

Send flowers to the Yaddof family.