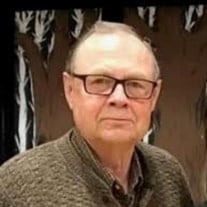 Dennis Herbert Schave, 79, of Morrison, Illinois, died peacefully in his home joining his beloved wife, Verna in heaven on March 2, 2022. A funeral service will be held Friday, March 11, 2022 at 3pm at Milledgeville Brethren Church. Burial will follow at Oak Knoll Cemetery, in Sterling, IL. Visitation will be held from 1pm to 3pm, prior to the service. In lieu of flowers, a memorial fund has been established. Dennis was born to Forrest and Margaret Schave on May 6, 1942. He was raised in East Moline. Dennis met the love of his life, Verna, at a 4H sock hop in the Quad Cities. Hitting it off, the couple would later marry in 1963 and continue to have 58 years of loving marriage together. They later moved the Schave Family to Morrison, Illinois. Here they not only continued to build their farm, but their family grew as well. Dennis and Verna raised nine children together. He was an ardent supporter of sports, plays and concerts of his children and grandchildren, typically attending as many events as he could. Dennis had a passion for the great outdoors. He worked side by side his father, growing their farms and teaching his sons all about agriculture. His passion for restoring the land and hunting deepened over the years. After retiring from farming, he focused on improving the wildlife habitat in the area culminating in being awarded Wildlife Farm of the Year 2000 with his father. Even as his time was ending, he continued his plans for his orchard. Dennis was faithful to our Lord and instilled the teachings of God unto his family. He leaves behind his son Shannon wife Marsha Schave, son Ryan wife Nancy Schave, son Eric wife Karin Schave, daughter Amy husband Joel wiseman, daughter Leah husband Brad Grenoble, daughter Erin Schave, daughter Abbi, and son Noah wife Carrie Schave, along with his brother Todd wife Cindy and brother David wife Marilyn. Dennis’s blessings in life live through his remaining 20 grandchildren and 9 great grandchildren. Preceding his death was his beloved wife Verna schave, son Richard Schave, mother and father in law Francis and Earl Hammond, sister Terry Price, mother and father Forrest and Margaret Schave. To our father: Dear God, We gratefully thank you for giving us our Dad, you must really love us, for you have given the best you had. Watch over him and bless him Lord, and keep him in your care. May he feel our love for him, is our humble heartfelt prayer. Love, your children.

Dennis Herbert Schave, 79, of Morrison, Illinois, died peacefully in his home joining his beloved wife, Verna in heaven on March 2, 2022. A funeral service will be held Friday, March 11, 2022 at 3pm at Milledgeville Brethren Church. Burial will... View Obituary & Service Information

The family of Dennis Herbert Schave created this Life Tributes page to make it easy to share your memories.

Send flowers to the Schave family.