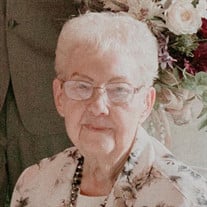 DeLoris M. Goodrow, age 91, of East Moline, formerly of Savanna, passed away Saturday, August 15th, at the Clarissa C. Cook Hospice Home. Funeral Service will be held Saturday, August 22nd, 2:00 p.m. at the Law Jones Funeral Home in Savanna. Visitation will be from 1:00 p.m. to 2:00 p.m. prior to the service on Saturday. DeLoris was born on January 29th, 1929, Daughter of Asa and Eula (Clark) Kurth. She grew up on her family’s farm and attended Cedar Rapids High School. It was in school were DeLoris met the love of her life, Robert Goodrow. The couple quickly became high school sweethearts. After school DeLoris and Robert married in 1945, while Robert was serving in the Navy. The couple celebrated 65 years of marriage, until Robert’s passing in 2012. Family was central in Deloris’s life. She was a proud Mother, Grandmother, and Great-Grandmother. She would do anything for her grandchildren. DeLoris liked to read, do puzzles, and cook. She was known for her amazing pot roasts, the fragrance of which would fill up the house on many family gatherings. Deloris will be dearly missed by her daughter, Diana Buck of Port Byron, IL; two grandchildren, Beth (Jim) Mitchell of Erie, IL, and Scott (Heather) Florence, of Gnadenhutten, OH; four great-grandchildren, Katie (Hunter) Hebeler of Rock Island, IL, Kelli (Ryan Kilburg) Mitchell of Cedar Rapids, IA, and Tyler Florence and Zoe Florence of Gnadenhutten, OH; and one great-great-grandchild. DeLoris is preceded in death by her husband, Robert; Her parents, Asa and Eula, and her brother Jay.

The family of DeLoris M. Goodrow created this Life Tributes page to make it easy to share your memories.

Send flowers to the Goodrow family.