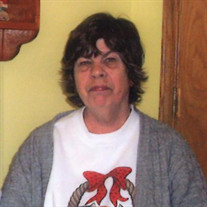 Delores R. Wood, of DeWitt, IA, formerly of Sugar Creek and Maquoketa, IA, passed away Thursday, February 10th, at Genesis Hospital in Davenport, IA. A private family funeral service will be held. Burial will take place in Sugar Creek Catholic Cemetery. Delores was born on the family farm, January 29th, 1948, daughter of Ben and Laurentia (Reuter) Roling. She was one of 10 children and the youngest between herself and her twin sister, Doris Lawrence. Growing up Delores helped her family on the farm, cutting grass, gathering eggs, and making sure the chores got done. Delores attended Sugar Creek Grade School, and later attended Northeast High School in Elvira, IA. She graduated with the class of 1966. Delores married Keith Wood on September 20th, 1975. Together the couple raised two children. Delores moved around throughout her life, from Maquoketa, to DeWitt, but always stayed close to Sugar Creek. Delores will be remembered for her kind and generous nature. She was the type of person that would give you the shirt of their back, and was incredibly giving to everyone she met. Delores was never upset or angry. She kept her spirits high, and in turn, raised the spirits of those around her. At the center of Delores’s life was her family. Her children and grandchildren were her pride and joy. Her kindness lives on in those she leaves behind. Delores will be dearly missed by her two children, Brent (Silke) Wood of Germany, and Tina Miller of Bettendorf, IA; seven grandchildren, Sam (Katelyn), Ajay, Vincent, Lucas, Hannah, Emma, and Philip; seven siblings, Leo “Pete” Roling, Bertha Pfab, Karen (Eugene) Pfab, Doris (Dan) Lawrence, Lois (Darrell) Trenkamp, Ruthann (Terry) Hahn, and Larry (Joan) Roling; and many nieces and nephews. Delores is preceded in death by her parents, Ben and Laurentia; two brothers, Kenneth and Jim; one brother-in-law, Clarence Pfab; and three sister-in-laws, Diane, Carolyn, and Marilou.

The family of Delores R. Wood created this Life Tributes page to make it easy to share your memories.

Send flowers to the Wood family.