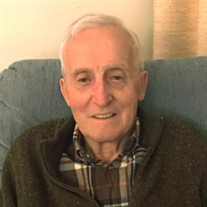 Dean “Speed” Robinson, longtime resident of Thomson, Illinois passed away Wednesday, November 18, 2020 at the Sarah Harding Retirement Home, Clinton, Iowa. A private family service will be held Sunday at the York Community Church in Thomson with burial in Lower York Cemetery, full military rites will be accorded by the Thomson American Legion Post 1025. You may watch from home at 2:00 p.m. Sunday on the Law-Jones FB livestream group. A Celebration of Life will be held from 1:00 to 4:00 p.m., Saturday, April 17, 2021 at Tipton Auction House, Thomson, Illinois. Memorials may be given in Dean’s honor to the Church, the Thomson American Legion, or the Sarah Harding Home. Dean was known to have a good sense of humor, but was best known for being kind, patient and humble. He was always encouraging, even in tough times. His go-to saying, “Just be the best that you can.” Dean was born April 13, 1928 in Stockton, Illinois, the son of Will Carlton and Sarah (Bohm) Robinson. His family moved to Fairhaven until he was ten, then moved to Thomson. Even though he wasn’t really lightning-fast, it was at the age of 10 that Dean received his life-long nickname “Speed.” He is a 1946 graduate of York Community High School in Thomson. He attended Northern Illinois University for a year before returning home to help care for his mother. Speed served in the US Army during the Korean War. That is where he learned his future trade as an electrician. When he was young, Speed worked at his dad’s fish market in Thomson, and “by accident” met the love of his life, Doris Obermiller. On December 27, 1953, Dean and Doris were married. They raised five children and celebrated 52 years of marriage until Doris’ passing in 2006. They made a good pair, Doris was in charge, and Dean made sure all the kids got to Church on Sunday. You could almost read his eyes when you talked about the old days. Speed remembered the hardships of the 1930s, then WWII and the Korean War, giving him an appreciation for the simple things in life. Some of his favorite memories include travelling to California with his friends when younger, playing for the Melon Tossers mens softball team, and when and he and Doris were raising kids, they loved hanging-out, building a pontoon boat, or just eating Manny’s pizza with the neighborhood. Later in life after Doris’ passing, Dean enjoyed eating out, riding to Potter’s Marsh and listening to music with his special friend, Virginia Livingston of Lanark. Speed was a Union Electrician and a member of the IBEW Local 145 for over 60 years. He worked for Leonard Stage Electric, Shaner & Handel Electric, Galor Electric, Savanna Electric and Clinton Electric Service. Speed was a member of the York Community Congregational Church, the American Legion Donald Ashpole Post #1025 Thomson, Illinois, and the Forty And Eight Club. Dean will be dearly missed by two sons, Donald (Debra) Robinson of Prophetstown and Craig (Linda) Robinson of Thomson; three daughters, Sarah (Mark) Knott of Fulton, Susan (Peter) Ohrt of Clinton, and Deana (Korey) Aljets of Thomson; eight grandchildren; three step-grandchildren; ten great-grandchildren and four step-great-grandchildren. Dean was preceded in death by his parents; his wife, Doris; a great-grandson, Nolan Zasadil; five siblings, Richard, Frances Lego, Marjorie Eubanks, Pearl Fish and Marsha “Marie” Griffiths. Dean’s family appreciated the caring love shown by the Sarah Harding staff, Beacon of Hope Hospice and caregiver, Rhonda Frost.

The family of Dean "Speed" Robinson created this Life Tributes page to make it easy to share your memories.

Send flowers to the Robinson family.