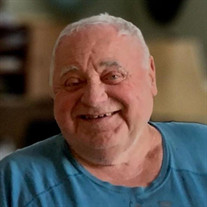 Dean Francis “Deano” Budde, age 74, of Preston, Iowa passed away Sunday, December 20, 2020 at the Jackson County Regional Healthcare Center, Maquoketa. A private family service will be held with Father Austin Wilker as Celebrant. Dean was born October 13, 1946 near Spragueville on the family farm, the son of Vernon and Lavita (Tebbe) Budde. He attended the Springbrook Catholic School, and by the age of ten, he knew his future would be off the farm. As soon as he was old enough, Dean went to work and learned to weld. This gave him the ability to work at the Chicago Northwestern Railroad, Central Steel and Clinton Engines, as a young man. It was during these young years that Dean met his partner in life, Linda Haiar. On April 23, 1966, Dean and Linda were married, living in Spragueville before moving to Preston. Dean started a forty-year career in Budde Construction while he and Linda raised five children. He retired in 2011, then applied his skills as he worked part-time at the Preston Locker. He loved working, especially with family. As a matter-of-fact, Dean he was a homebody, enjoying teaching the younger generation many of the lessons and skills that he had learned. Otherwise he was often quiet, thinking and figuring how to fix things. He liked listening to classic country. Sudoku, Jeopardy, and the Chicago Cubs were his favorites. He liked to camp and fish with friends and family. Dean will be dearly missed by his wife Linda of Preston; five children, Kim (Mike) Roling of Dewitt, Kevin (Ann) Budde of Davenport, Jamie Budde of Fayetteville, North Carolina, Carrie Budde of Horsham, Pennsylvania and Jody Budde of Iowa City; four grandchildren, Whitney and Ryne Roling, Austin Budde and Amanda Budde; two great-grandchildren, Otis and Piper Dues; a brother, Ricky (Dory) Budde of Bellevue; a sister, Connie (Lonnie) Ernst of Preston; and a sister-in-law, Bev Cook of Preston. Dean is preceded in death by his parents, and two brothers, Loras Budde and Roger (Linda) Budde, and a sister-in-law, Linda Budde.

The family of Dean Francis "Deano" Budde created this Life Tributes page to make it easy to share your memories.

Send flowers to the Budde family.