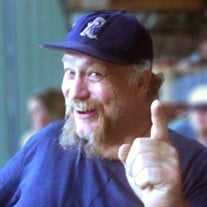 David R. Groezinger, of Elizabeth, IL, passed away Friday, February 14, 2020 at his home. A funeral service will be held Saturday, February 22, 2020, at 11 am at the First United Methodist Church in Elizabeth, IL. Visitation will be held from 9 am to 11 am, before the service. Cremation rites will be accorded, and burial will take place on a later date. David was born January 5, 1969, in Galena, IL, the son of Delos and Patricia (Roberts) Groezinger. He attended Elizabeth schools, graduating from River Ridge High School with the class of 1987. He attended college at the University of Wisconsin – Platteville, where he learned trade skills that helped him throughout his career. A machinist by trade, David held numerous factory jobs throughout his life. Being a lifelong member of the community, David was proud to serve as an EMT and a volunteer firefighter in Elizabeth. David loved boating on the Mississippi River in his cabin cruiser, and always had a good time attending Cheese Days in Monroe, WI, with his brother Scott, and friends. David always seemed to enjoy being a host. He had a collection of beer steins, and even though he wasn’t much of a drinker, he loved to serve his guests out of them. Every year, he’d host a big Christmas Eve breakfast where all were invited. And we do mean “all!” Whether you were family, a friend, or the person in line ahead of him at the coffee shop, you could expect an invite. David was also a talented singer, singing “Danny Boy” at many family funerals. David is survived by his mother, Patricia Schaible, of Elizabeth, IL; sisters, Sue (Dennis) Roberts, of Savanna, IL and Melody Groezinger of Omaha, NE; brother, Scott (Nicole) Groezinger, of DeKalb, IL; brother-in-law, Richard Theyerl, of Rockford, IL; and many nieces and nephews. David is preceded in death by his father, Delos Groezinger; sister, Annette Theyerl; and step-father, Rodney Schaible.

The family of David R. Groezinger created this Life Tributes page to make it easy to share your memories.

Send flowers to the Groezinger family.