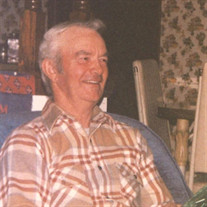 David P. Beeck, age 88, of Miles, passed away Tuesday, November 24th, 2020, at Select Specialty Hospital in Davenport. Due to COVID-19, a private family funeral service will be held. Friends and family are invited to share in David’s life at www.lawjonesfuneralhome.com. David was born on August 27, 1932, son of Marvin and Helen (Straub) Beeck. He was a 1950 graduate of Miles High School. David served in the United States Army from 1953 – 1955 in the Korean War, repairing heavy equipment. After serving his country David returned to the family farm, and remained a dedicated farmer for his entire life. David married Joan Miller on February 22, 2004, at Gateway Faith Church in Fulton, IL, where he was a member. David was a member of the Preston Gun Club, where he taught hunter safety classes and participated in several pistol tournaments. He was a member of the Miles American Legion, Preston AmVets, and the NRA. He enjoyed hunting and fishing getaways with friends, traveling out west and up north. A special experience for David was going on the Quad Cities Honor Flight to Washington D.C. with his brother Don, who was his gaurdian. David and Joan enjoyed family gatherings, traveling, and going out to their favorite restaurants. David will be dearly missed by his loving wife, Joan; five step-children, Craig (Julie) Miller of Thomson, IL, Cheryl Miller of Venison, TX, Diana (Tom) Gerardy of Clinton, IA, Jay Miller of Clinton, and Melanie (Larry) Witt of Camanche, IA; several step-grandchildren and great-grandchildren; one brother, Donald (Mary) Beeck of Miles, IA; three nieces and nephews, Laurie (Mark) Alberts of Janesville, IA, Paul (Sarah) Beeck of Bryant, IA, and Mark (Kelly) Beeck of Ankeny, IA; and 8 great nieces and nephews. David is preceded in death by his parents, and a brother, Ronald Beeck.

David P. Beeck, age 88, of Miles, passed away Tuesday, November 24th, 2020, at Select Specialty Hospital in Davenport. Due to COVID-19, a private family funeral service will be held. Friends and family are invited to share in David&#8217;s life... View Obituary & Service Information

The family of David P. Beeck created this Life Tributes page to make it easy to share your memories.

Send flowers to the Beeck family.