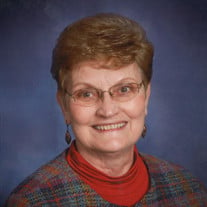 Darla Jean Bormann, daughter of the late Lloyd and Belle Keithley Bratthauer, passed away Tuesday, February 1, 2022. She was born in Preston, Iowa on June 28, 1940. Darla attended Deep Creek #7 Clinton County School and Goose Lake High School. Shortly after her high school graduation in 1958, she became employed at Clinton National Bank as a bookkeeper. Darla married the love of her life, Arnold Leo Bormann, on August 20, 1959. Together they began farming in March of 1960 running a dairy farm. Darla gave birth to their first child in December of 1960 and by 1970 six of their seven children had been born. In 1980 their youngest child came along, completing their family of 7 children. Caring for 7 children on a small Iowa farm was a full-time job. Darla was exceptionally skilled and talented in gardening, canning, and baking. By her example, she instilled a strong work ethic and welcoming spirit in each of her children. Darla was also an active member of St. Joseph’s Catholic Church’s community life in Preston for over 60 years. While a member of St. Joseph’s, Darla taught religion classes for twelve years, served on the church council, and was a volunteer member of several church committees. After her children had graduated from high school, Darla worked at TM Woodworks for ten years in sales. Throughout her life, she very much enjoyed playing cards with family and friends, especially Euchre. As a matter of fact, her most recent card game, Golf, was one she readily and proudly taught to several of her grandchildren during this past Thanksgiving and Christmas holiday. Though she loved going to her grandchildren’s ballgames, dance recitals, concerts and plays as often as she possibly could, she mostly just loved spending quality time with each of them. Family was extremely important to Darla and Arnie, and their home was always full of love and joy. Recently, Darla was asked what two words of advice she would like to share with her grandchildren. Her response was immediate and simple: love and communication. Darla’s visitation will be held on Monday, February 7 from 9 - 11 a.m. at St. Joseph’s Catholic Church in Preston. A celebration of life funeral mass will immediately follow at 11:00 a.m. Darla is survived by seven children. Cindy (Loren–Skip) Manning of Clinton; Mark (Ann) Bormann of Preston; Kevin (Carolyn) Bormann of Preston; Lisa (Steve) Feuerbach of Sycamore, Illinois; Gary (Tammy) Bormann of Andover; Lori (Marl) Singapore; Ryan (Becky) Bormann of Minneapolis, Minnesota; 18 grandchildren and 9 great grandchildren; and brother/sisters-in-law Ruby Bratthauer of Sabula; Robert (Madonna) Bormann of Monticello; Laura (Junior) Steines of Bellevue; Lavonne Gerlach of Maquoketa; David (Gwen) Bormann of Dubuque; Dennis (Becky) Bormann of Preston; Arlene (Ed) Skoff of Dewitt; Zita (Bill) Blumhoff of Albany, Illinois; Raymond (Lisa) Bormann of Preston; Joyce Miller of Preston; and many nieces and nephews. She was preceded in death by her parents, her husband Arnold, three brothers: Daryl, Harris and Roger, her sister Mary Belle Miller, and brothers-in-law Ellis Miller, Lawrence Thines, Dave Miller, Roger Gerlach, and sisters-in-law Eleanor Thines, and Phyllis Bratthauer.

The family of Darla Jean Bormann created this Life Tributes page to make it easy to share your memories.