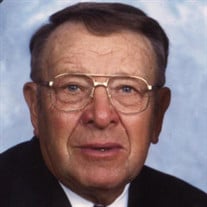 Daniel “Dan” Smith, age 92 of Hauntown, Iowa, passed away peacefully on Monday, November 1, 2021 at Legacy Pointe Assisted Living, Iowa City, Iowa. His funeral service will be held at 10:00 a.m. Saturday, November 6, 2021 at the United Presbyterian Church, in Miles, Iowa. Visitation will be from 5:00 to 7:00 p.m., Friday, November 5, 2021 at Law-Jones Funeral Home, Preston, Iowa as well as one hour prior to the service at the church. Burial will take place in Smith Cemetery, Almont, Iowa. A memorial fund has been established in Dan’s memory. Dan was born May 12, 1929 in Clinton, Iowa, the son of Kamm and Vernetta (Eggers) Smith. He is a graduate of Miles High School, Class of 1947. Dan served in the US Army in the Korean War. On September 2, 1950, Dan married Marlys Stahnke in LaPorte City, Iowa. They raised three children and celebrated 62 years of marriage before Marlys’ passing in 2013. After returning from Korea, Dan worked in the construction business with his father. He later started Smith Bros. Construction with his brother, Jack. Dan was a member of the United Presbyterian Church in Miles where he held numerous church offices, mentored for Kid’s Hope, sang in the church choir, and involved with Country Chorale. He served on both the Sabula and East Central School Board and was a member of the Miles American Legion. Dan loved to hunt, fish, ride bike, play cribbage, dominos and woodworking, especially working with his scroll saw. In his free time, you could expect Dan to be working in his woodshop making bird houses from odds and ends of scrap lumber. Dan and Marlys were avid bicyclists riding their tandem bicycle on area bike trails. He also participated in RAGBRAI, riding across the state of Iowa four times. Dan was known for his sense of humor, his gentle guidance and his love of sports. He loved watching his kids and grandchildren participating in sports. Dan loved watching the Chicago Cubs, Iowa Hawkeyes, and Sacramento State Baseball games. He and Marlys continued attending area sports events even after their children were no longer participating. Dan will be dearly missed by his children, Keith (Catherine) Smith of Waterloo, Iowa, Kay (Dennis) Ortscheid of Iowa City, Iowa, Ken (Rae Ellen) Smith of Locust Grove, Virginia, seven grandchildren, 7 great-grandchildren and his brother Jack Smith of Hauntown, Iowa. Dan is preceded in death by his wife, Marlys, his parents, Kamm and Vernetta Smith and two sisters, Beverly Kraciun and Carole Miller. The family would like to thank the Staff at Legacy Assisted Care Facility in Iowa City and the Iowa City Hospice Staff for the support and exceptional care.

The family of Daniel D. Smith created this Life Tributes page to make it easy to share your memories.