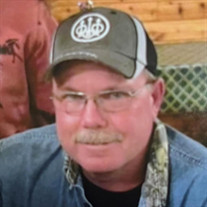 Daniel Todd Shaulis, age 58, of Lanark, passed away Friday, January 14, 2022 at St. Anthony Medical Center in Rockford. A funeral service will be held 1:00 p.m. Wednesday, January 19, 2022 at Law Jones Funeral Home in Lanark with burial in the Lanark Cemetery. Visitation will be held 4:00 – 7:00 p.m. Tuesday, January 18, 2022 at the funeral home. The service will also be shared at 1:00 p.m. Wednesday on Facebook live at this link, https://www.facebook.com/groups/2185555181583570, or any time there after. Memorials may be given in Dan’s honor to the Lanark Fire Department. Dan was born December 10, 1963 in Dixon, Illinois the son of Donald and Dorothy (Krum) Shaulis. He grew up on the family farm located on Stone Bridge Road west of Lanark. This is where he learned the value of a hard days work, being honest and treating others as you would want to be treated. He kept those traits all of his life and it has made all the difference. As a young man, he also learned to hunt and trap, as he developed a love of shooting. Dan is a 1982 graduate of Lanark High School where he played football. In his twenties, Dan became a fireman for the Lanark Fire Department, where he served as Chief and was currently in the position of Deputy Chief. He has been an active Fireman for 33 years. His working career was working as a Union Electrician for 20 years, often taking on the tough jobs with high voltage. He loved to figure out a problem, getting it done right. He was a member of IBEW Local 364. Dan enjoyed hunting deer, prairie dogs in South Dakota, and even bear up in Wisconsin. His farming background gave him a love of John Deere tractors and he always liked riding four-wheelers and motor bikes. He loved raising vegetables in the garden and canning much of what he raised. Dan had a signature mustache that he wore with pride. This came about after losing all his hair as a young man while beating cancer three times. While on the Lanark Fire Department he struck up a friendship with one of the EMT’s, Tricia Ewing. They have enjoyed eight years together as loving companions, celebrating their life together. He will also be dearly missed by her daughter and son, Alexis (Jake) Thomas of Lake Carroll and Austin (fiancé Marilyn) Ewing of Milledgeville and; Dan’s brother, Dave (Jill) Shaulis of Lanark; Dan’s sister, Dianne (Bill) Murphy of Harmon, Illinois; a sister-in-law, Kari (Rod) Hartman; and several nieces, nephews, cousins, great nieces and great nephews, and Ryan Shaulis and his family. Dan is preceded in death by his parents, Donald and Dorothy; his in-laws, John and Shirley Ewing; and a special niece, Cory Murphy at one day old in 1984. The family wishes to express a special thank you to St. Anthony Critical Care Unit in Rockford.

The family of Daniel Todd Shaulis created this Life Tributes page to make it easy to share your memories.

Send flowers to the Shaulis family.