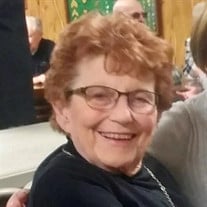 Connie Bailey Sheridan, age 87, of Dubuque, IA, formerly of Hanover, IL, passed away Sunday, December 12, 2021, at MercyOne Dubuque Medical Center. A funeral mass will be held at noon on Friday, December 17, 2021 at St. John the Evangelist Catholic Church, in Hanover, IL. A visitation will take place from 10am to noon at the church prior to the mass. Burial will follow at Evergreen Cemetery in Hanover. Family and friends are invited to share stories and remembrances of Connie’s life at www.lawjonesfuneralhome.com Connie was born April 18, 1934, in Anamosa, IA, the daughter of Laurence and Imelda (Stillmunkes) Bailey. She spent most of her childhood in Freeport, IL, graduating from Aquin High School, with the class of 1952. On May 1, 1954, Connie married Thomas R. Sheridan. They celebrated 59 years of marriage before Thomas’ death in 2013. Connie and Thomas settled in Hanover in 1959, where Connie spent the early years of their marriage making a home for their budding family, ultimately growing to nine children. She loved being a mother and all that came with it. Connie also had a passion and talent for interior decorating and antiquing, attending auctions and antique shops wherever she traveled. Connie opened The Den of Antiquity antique store, first in Hanover, then later in Galena. Later in life, she was employed at Lowe’s in Dubuque, for 17 years. Connie also spent time working for Dick’s Grocery Store in Galena, and was active in the Jo Daviess County Convention & Visitors Bureau and the Hanover Schools Red Devil Booster Club. Connie loved two things above most; her family and travel. So naturally, trips to the family cottage on Clark Lake in Door County was close to heaven on earth for her. Many blissful summer days and nights were spent on that lake. But it wasn’t just her beloved cottage that sparked Connie’s sense of adventure. She loved to travel and see new places, near or far; “hop in the car and go!” was an unofficial mantra, of sorts. And if there was a body of water involved, all the better! Connie will be dearly missed by her nine children, Tim (Judy) Sheridan, Phil (Trish) Sheridan, Kelly (Karen) Sheridan, Patrick (Julie Weaver) Sheridan, Anthony (Tara) Sheridan, Terry Sheridan, Kerry (Rob) McCullough, Danny Sheridan and Clancy (Noreen) Sheridan; ten grandchildren, Lesley Sheridan, Angela Sheridan, Kevin Sheridan, Brigid Sheridan, Emily (Joel) Allen, Darby (Brittany) McCullough, Quinn McCullough, and Clare McCullough, Aiden Sheridan, Flynn Sheridan; brother, Chuck (Midge) Bailey; and sister, Mary Beth (Bailey) McCormick. Connie is preceded in death by her husband, Thomas; parents, Laurence and Imelda; brother, Alan Bailey; and brother-in-law, Joseph McCormick. In lieu of flowers, the family requests donations be sent to St John the Evangelist church in Hanover, in remembrance of Connie Sheridan.

The family of Connie Bailey Sheridan created this Life Tributes page to make it easy to share your memories.

Send flowers to the Sheridan family.