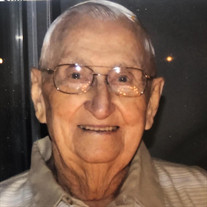 Clyde “Sam” Semrow had a God-given talent for remembering detail and telling wonderful stories of people, places and things. At the age 96, Clyde passed away Monday, April 27, 2020 at home with family by his side. A private family funeral service will be held. You may watch from your home on Facebook Live 1:00 pm Saturday, May 2, 2020, or any time after, by going to the funeral home Facebook page and joining Clyde’s group ahead of time. A memorial fund has been established. Friends and family are also invited to share in Clyde’s life at lawjonesfuneralhome.com Clyde was born September 22, 1923, in Rodden, Illinois, the son of Robert and Nina (Cook) Semrow. His birthplace was on the premises of the old Rodden General Store and Post Office which has now been converted to the Inn at Irish Hollow. Growing up in that home with his grandparents next door, Clyde flourished as a young man. He and sister, Winnie, walked to the Black Road Country School and played in the rolling hills and open fields of the area. Clyde could tell you all about the abandoned Winston Tunnel which is located a few miles west of Rodden. He graduated from Hanover High School in 1941. After High School, Clyde joined the Army and served during WWII. Clyde married two times and helped raise several children. Clyde later married Donna Fisher on September 9, 1999. They celebrated 18 years of marriage until Donna’s passing on December 28, 2017. Clyde worked at the Savanna Army Depot for 30 ½ years, retiring in 1972. He then worked at Law Jones Funeral Home for more than 40 years. He was a member of the American Legion and Moose. He was a member of NARFE AND AARP. He was a past member of Savanna Ambulance Association and the Savanna Township Board and the Savanna Police Pension Board. He was a past member of the original RIA Credit Union Board. He was a member of the 1st United Methodist Church. Clyde was a life-long Chicago Cubs Fan, loved golfing, and socializing with friends. Clyde will be dearly missed by his two sons, Robert (Linda) Semrow of Columbia Falls, Montana and Sam (Darlene Gulliksen) Semrow of Lake Zurich, Illinois; two daughters, Sue Ann Semrow of Tahleguah, Oklahoma and Sandra (Keith) McQuarrie of Carbondale, Illinois; 4 grandchildren, Christine, Samantha, Jovie Nina and Mallory; and his previous daughter-in-law, Juvy Semrow. Clyde is preceded in death by his wife, Donna; parents Robert and Nina, and his sister Winifred (Charles) Kilpatrick.

Clyde &#8220;Sam&#8221; Semrow had a God-given talent for remembering detail and telling wonderful stories of people, places and things. At the age 96, Clyde passed away Monday, April 27, 2020 at home with family by his side. A private family... View Obituary & Service Information

The family of Clyde Robert "Sam" Semrow created this Life Tributes page to make it easy to share your memories.

Clyde “Sam” Semrow had a God-given talent for remembering detail...

Send flowers to the Semrow family.